George Miller’s Mad Max 2: The Road Warrior (1981) is my favourite film. The film portrays a world running out of oil.

“…The end of the world, it seems, is a sprint to decide who can consume the very last drop of oil. Which is why, despite the bizarre cast of characters and outlandish setting, it's hard to shake the feeling that The Road Warrior could happen, or at least start to happen, any day now…” (Popular Mechanics, March 2008)

If we wish to preserve for future generations what a world awash in oil looked like, we will do no better than documenting a day at Pune’s busy junction- Swargate. For me, every visit to Swargate is surreal where every square inch is occupied by machines devouring hydrocarbons while trying to kill me!

I have watched Swargate almost every month since the beginning of year 1999 and I can easily say it never looked and felt so bad and hopeless. It’s Mad Max 2 in reverse. Swargate has become an example of what we should not allow our cities to become.

“…Here are three facts about oil: it is a finite resource; it drives the global transport system; and if emerging economies consumed oil as Europeans do, world consumption would jump by 150 per cent. What is happening today is an early warning of this stark reality. It is tempting to blame the prices on speculators and big bad oil companies. The reality is different.

Demand for oil grows steadily, as the vehicle fleets of the world expand. Today, the US has 250m vehicles and China just 37m. It takes no imagination to see where the Chinese fleet is headed. Other emerging countries will follow China’s example. ..

What can people at Swargate do if they have not yet heard anything from the market or chosen not to hear anything?

The only long term solution for this mess is a reasonably good public transport that encourages people of all social strata to use it. Pune’s public transport stinks. It’s easily one of the worst of major cities in India. I know it because I use it regularly.

You also need people who are ready to make small sacrifices for the larger cause. Young working middle-class people should try using public transport at least one day in a week. Today very few do and hence they don’t complain about it with as much intensity as they do about bad roads, lack of parking space or even stray dogs.

Result: almost each middle-class Pune household has as many vehicles as number of family members. 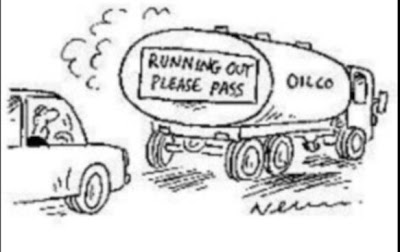 The Spectator
Posted by Aniruddha G. Kulkarni at 10:00 AM No comments: