"The jackfruit is one of the three auspicious fruits of Tamil Nadu, along with the mango and banana, known as the mukkani (முக்கனி). These are referred to as ma-pala-vaazhai (mango-jack-banana). The three fruits (mukkani) are also related to the three arts of Tamil (mu-Tamizh).[30] Jackfruit is the national fruit of Bangladesh. It is also the state fruit of the Indian state of Kerala."

Eating jackfruit in summer, when the fruit used to compete unfavourably with the mangoes for attention, at our home in Miraj (मिरज), was a family activity.

Twice or so the summer, my father used to buy the fruit and, with the help of my mother, used to cut it and we would sit around and eat the whole of it. There were two types of the fruit available- 'kapa' (कापा) and 'barka' (बरका). Apparently, you need the former type to eat it the way I have described it.


Suzanne Goldenberg writes in The Guardian on April 24 2014:


"The World Bank and United Nations warned recently that rising temperatures and unpredictable rainfall had already reduced yields of wheat and corn, and could lead to food wars within the decade."

So contrary to what great Ms. Weil has said, wheat could be a cause of  international conflict !

"Researchers say jackfruit — a large ungainly fruit grown across south and south-east Asia — could be a replacement for wheat, corn and other staple crops under threat from climate change.."

"...Efforts in India to exploit the fruit’s potential coincides with a global push to expand food production, especially in developing countries which are expected to face growing challenges to feed their people in the coming decades.

Jackfruit can fill the gap on a number of counts, said Danielle Nierenberg, president of Food Tank, which works on sustainable agriculture.

“It is easy to grow. It survives pests and diseases and high temperatures. It is drought-resistant,” she said. “It achieves what farmers need in food production when facing a lot of challenges under climate change.”
The fruit is rich in potassium, calcium, and iron, said Ms. Reddy, making it more nutritious than current starchy staples..."

"Two billion people around the world, primarily in south-east Asia and Africa, eat insects – locusts, grasshoppers, spiders, wasps, ants – on a regular basis. Now, with food scarcity a growing threat, efforts are being made to normalise the concept of entomophagy, or the consumption of insects, for the other 5 billion. Last year, the UN's Food and Agriculture Organisation (FAO) published a list of more than 1,900 edible species of insects; the EU, meanwhile, offered its member states $3m to research the use of insects in cooking.

Why? Because insects, compared to livestock and fish, are a much more sustainable food source. They are available in abundance: for every human on Earth, there are 40 tonnes of insects. They have a higher food conversion rate than even our fastest-growing livestock (meaning they need to consume less to produce the same amount of meat) and they emit fewer greenhouse gases. As a fast-food option, which is how people treat them in countries such as Thailand, insects are greatly preferable to the water-guzzling, rainforest-destroying, methane-spewing beefburger. They are nutritious too: rich in protein, low in fat and cholesterol, high in calcium and iron..." 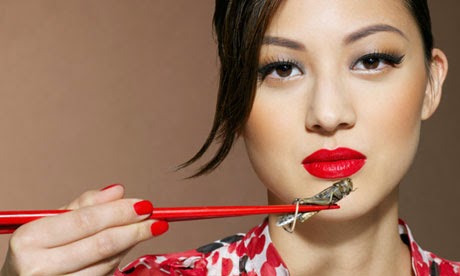 "But Wait, We Also Serve Jackfruit"


"...Ripe Jackfruit –The green unripe jackfruit is used extensively in cooking across India for its texture that resembles meat. And then there is a pungent-smelling ripe jackfruit, which is India’s answer to the durian, famous for its strong odor which is said to resemble anything from rotting onions and gym socks to raw sewage..."