What is Deadliest? Traffic,Temple Queues and Terrorism. In that Order.

We are not driven around in a chauffeur driven car. We don't live in a gated community. Our family has to worry about bombs.

But I am more worried about Pune traffic.

Recently my wife and I met with an accident. Luckily for us we were not knocked down by a truck.

It had to happen. Stochastic Processes.

I go for a morning walk. My wife's cousin has warned me that the benefits that accrue to me by that walk are offset by the risk I take by walking on a busy Pune road for almost an hour.

Another "deadly place" in today's India is a queue of devotees.
Times of India said on October 1, 2008:

"NEW DELHI: Stampedes are bigger killers in India than bomb blasts that so dramatically capture our mindspace. In 2008 alone so far, over 360 people lost their life in major stampedes compared to 156 killed by bomb blasts.

This year is not an aberration. Data collated for the last nearly nine years shows that while 875 people have lost their lives in stampedes that were big enough to make the national press, 766 have been killed by terror bombs.

The actual number killed in stampedes may be even higher. What we have collated is based on press reports, since no centralized data base exists for such incidents, unlike with terror attacks. It is also clear that single bomb blasts rarely kill people in the kind of large numbers that are associated with stampedes..."

Luckily my family does not visit popular temples. 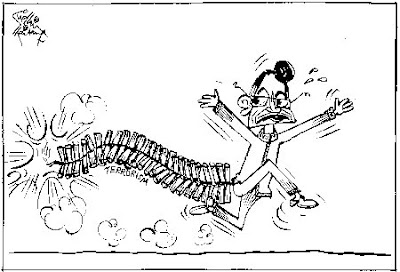