Never Throw a Stone at Chameleon because She could be Lonely

One barbaric practice I often witnessed in my childhood at Miraj was: Boys throwing stones at chameleons and dogs.

Unlucky dogs were often injured but chameleons were usually killed in those murderous chases.

I seldom use the word 'proud' in my connection but I am very proud that I never threw stones at chameleons and dogs.

If one wants one more reason for not committing this barbarity, it is provided by Emily Gravett who has written a picture book: "Blue Chameleon".

I was captivated by following illustration. Can I ever throw a stone at that beauty? 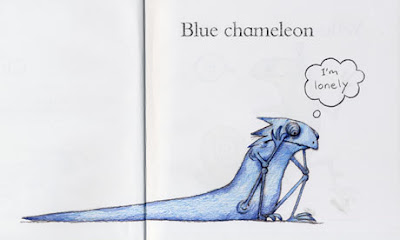 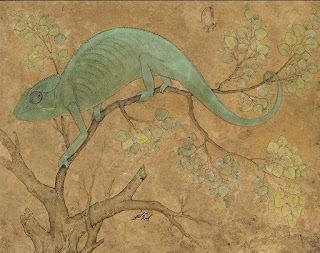 (India's very own) Mansur's watercolor painting of a chameleon, from around 1595.

courtesy: Roberta Smith and The New York Times September 29, 2011
Posted by Aniruddha G. Kulkarni at 9:00 AM 2 comments: Links to this post