Remove Outsiders from the Ajanta Murals!

A young photogenic leader was thundering in Marathi at an election rally..the crescendo of "down with outsiders" in his speech had reached skies over Aurangabad- just 100 km from Ajanta- as I surfed the TV channels on October 2 2014. 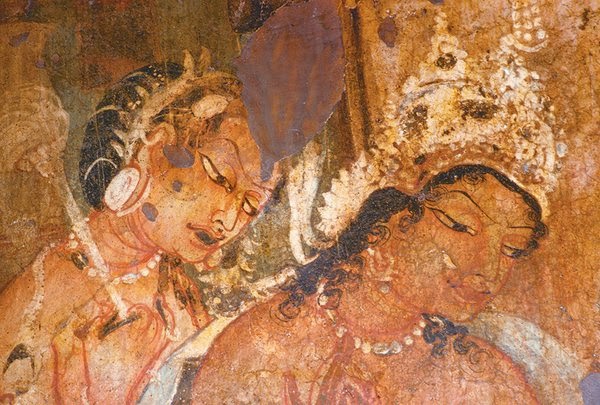 "...The early rock-cut cave monasteries of western India also predate almost all the extant texts of Buddhism (written beginning in 100 BC but mostly surviving in much later copies), and all we know about them comes from the Sanskrit and Pali inscriptions left on the rock walls by the monks, their patrons, and devotees. By then the great monasteries of ancient India appear to have been as powerful as those in medieval Europe, and often had their own mints and owned landed estates, some of which were worked by slaves.
The second century BC was a period of great expansion of international trade, and these monasteries, remote as they may seem now, were originally built on the great trade routes of their time. The valleys they crown once saw the frequent passage of caravans bringing luxury goods—ebony, teak, and sandalwood, ivory and translucent Indian textiles, pepper and cinnamon—to the coast where they would then be shipped, usually by Jewish and Greek middlemen, to the Red Sea and thence to Rome.
The inscriptions show how surprisingly middle-class and mercantile early Buddhism was, and it is clear that the patrons of these early monks were often traders or their bankers. More surprising still, some of them designate themselves as Yavanas—“foreigners,” probably Greeks. As Walter Spink’s pupil Pia Brancaccio has pointed out, the Ajanta murals


portray a prosperous and multicultural environment filled with people wearing golden jewels and…enjoying imported goods. Even the pigments used in the paintings indicate international trade connections—the blue, for example, was obtained from lapis lazuli imported from Iran or Afghanistan…. Recognizable among the crowds are many foreigners, easy to spot because of their different clothes, hairdos, and in some cases even skin colors…. Foreign figures appear so commonly in the murals that they must surely have been part of the social scene at the time..."