When Food & Violence Combine, The Godfather is Borne

“When food and sex collide…The new commercial for Hardee’s burger, a hit on YouTube features model Padma Lakshmi suggestively biting off chunks of a burger, that’s dripping with sauce.

…Alyque Padamsee, the CEO of AP Advertising Agency says, "The trend of combining food and provocative imagery is not entirely new. The world-renowned Häagen-Dazs ice cream features very risqué situations where the actors sensuously enjoy an ice cream. It’s only a fad that’s seeing a revival right now. But it will soon fade away as food is primarily about gastronomic appeal and not sex appeal as shown in many ads these days."…”

I don’t think this will ever fade away.

The Godfather-I and II had lots of violence but not much sex. In the movie, gangsters eat all the time. They even have time to explain a recipe. Food replaces sex in the well-tried recipe of commercial success: sex and violence.

I have always felt that director Ram Gopal Varma missed a trick in Satya (1998). He could have shown his gangsters eating lots of yummy roadside food in Mumbai before blowing out other people's brains. 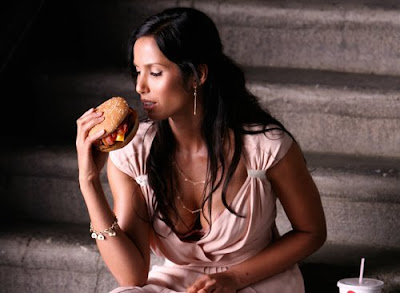 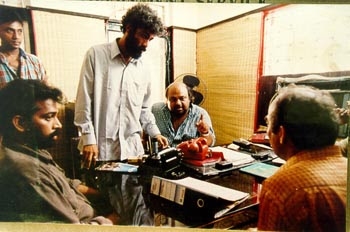 "Goli Maar Bheje Mein"(Satya, 1998)...but only after eating yummy roadside Vada-pav or pav-bhaji
Posted by Aniruddha G. Kulkarni at 9:00 AM No comments: Links to this post