Mohammed Hanif, 'A Case of Exploding Mangoes', 2008:
'“Did Jinnah ever have to make these decisions?” General Zia made a last desperate attempt to educate Brigadier TM about the vestiges of history. “Did Jinnah ever have to fight the Russians in the morning and convince the Americans in the evening that it is a fight still worth fighting? Was he ever a prisoner in his own Army House?”'

"The ambassador had reasons to be inclusive. A year into his job, Arnold Raphel was feeling increasingly isolated as dozens of American agencies ran their own little jihads against the Soviets along the Pakistan-Afghanistan border. There were those avenging Vietnam and there were those doing God’s work and then there were charities with names so obscure and missions so far-fetched that he had a hard time keeping track of them. Now that the last Soviet soldiers were about to leave Afghanistan and the mujahideen were laying siege to Kabul, some Americans were tearing at each other’s throats to claim credit, others were just lingering, reluctant to go home, hoping for another front to open. Just last week he had received a demarche about a group of teachers from the University of Minnesota who were writing the new Islamic books for Afghanistan and sending them to Central Asia. He investigated and was told to keep his hands off as it was yet another branch of yet another covert programme. Every American he met in Islamabad claimed to be from ‘the other agency’."

Mr. Khan was a household name to most Indians of my generation as kids because he led Pakistan in a war against India in 1971. Genocide in East-Pakistan also happened on his watch.  This all is par for the course.

What I find always intriguing is the role of USA in all this because that country has been a darling of India's middle class for as long as I remember.


I wish to include a longish quote from Gary J. Bass's ‘The Blood Telegram: Nixon, Kissinger, and a forgotten genocide', 2013:

“…As its most important international backer, the United States had great influence over Pakistan. But at almost every turning point in the crisis, Nixon and Kissinger failed to use that leverage to avert disaster. Before the shooting started, they consciously decided not to warn Pakistan’s military chiefs against using violence on their own population. They did not urge caution or impose conditions that might have discouraged the Pakistani military government from butchering its own citizenry. They did not threaten the loss of U.S. support or even sanctions if Pakistan took the wrong course. They allowed the army to sweep aside the results of Pakistan’s first truly free and fair democratic election, without even suggesting that the military strongmen try to work out a power-sharing deal with the Bengali leadership that had won the vote. They did not ask that Pakistan refrain from using U.S. weaponry to slaughter civilians, even though that could have impeded the military’s rampage, and might have deterred the army. There was no public condemnation—nor even a private threat of it—from the president, the secretary of state, or other senior officials. The administration almost entirely contented itself with making gentle, token suggestions behind closed doors that Pakistan might lessen its brutality—and even that only after, months into the violence, it became clear that India was on the brink of attacking Pakistan.
This might give the impression of passivity, of a foreign policy on autopilot. Not so. Nixon and Kissinger actually drove their South Asia policies with gusto and impressive creativity—but only when silencing dissenters in the ranks, like Blood, or pursuing their hostility toward India. They found no appeal in India, neither out of ideological admiration for India’s flawed but functioning democracy, nor from a geopolitical appreciation of the sheer size and importance of the Indian colossus. Instead, they denounced Indians individually and collectively, with an astonishingly personal and crude stream of vitriol. Alone in the Oval Office, these famous practitioners of dispassionate realpolitik were all too often propelled by emotion.

The slaughter happened at the same time that Nixon and Kissinger were planning their opening to China—a famous historic achievement that has a forgotten cost. Everyone remembers Nixon and Kissinger’s months of clandestine Chinese diplomacy, followed by the amazing spectacle of the presidential visit to Mao Zedong. But what has been lost is the human toll exacted for it in Bangladesh and India. Nixon and Kissinger needed a secret channel to China, which they found in the good offices of Yahya—an impeccably discreet tyrant on warm terms with both the United States and China. While the Pakistani government was crushing the Bengalis, it was also carrying covert messages back and forth from Washington to Beijing. Archer Blood sent off his dissent telegram just three months before Kissinger took his first secret trip to Beijing, flying direct from Pakistan, which sped him on his way with hospitality, an airplane, and a cloak-and-dagger cover story. Nixon and Kissinger, always sympathetic to the Pakistani junta, were not about to condemn it while it was making itself so useful. So the Bengalis became collateral damage for realigning the global balance of power. In the bargain, Nixon and Kissinger also turned their backs on India: the strategic opening to one Asian titan meant a closing to another. Indeed, one of the very first things that the United States did with its new relationship with Mao’s China was to secretly ask it to mobilize troops to threaten democratic India, in defense of Pakistan. It is absolutely right that the normalization of the American relationship with China stands as an epochal event, but those who justifiably want to celebrate it should not overlook what it meant for the Bengalis and Indians….” 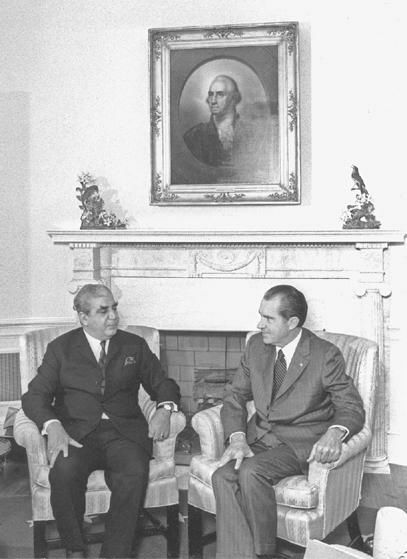 Courtesy of the Richard Nixon Presidential Library and Museum
Posted by Aniruddha G. Kulkarni at 9:00 AM No comments: