"...in summation, it can be said that Marathi person enjoys auditory experience more than visual experience An average Marathi person engrosses in music very well. Very little in pictures. Almost none. It's certainly true of ordinary people. But even those writers, poets and critics who are celebrated in Marathi literature, are well known for their talent can't see pictures on the cover and those (if they exist) inside. Let the book be of the other authors' or their own ! Then appreciating them remains a remote thing..."

I have already written more than one post on the subject. Most volubly here on November 9 2010.

I wish to give another example before I go ahead.

I often read parts of  G A Kulkarni's (जी ए कुलकर्णी) book 'Pinglavel' (पिंगळावेळ). I have a copy of its first edition published in 1972. Its cover is striking.

I noted recently that the book does not even mention who the cover artist is! One has to figure out from the artist's signature on the cover. And this is from the author who, according to Vasant Sarwate, was a man of learning in visual arts and was himself a painter of some caliber. 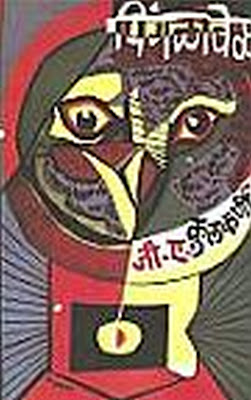 "...In a pervasively influential eighteenth-century essay, Laocoon: or The limits of Poetry and Painting, by the German aesthetician, Gotthold Lessing, Western culture was admonished against confusing between the nature of poetry or prose—written forms whose province is time, and the nature of visual forms like painting and sculpture, whose province is spatial..."

Since Marathi people enjoy music so much, is music too a form whose province is time and NOT spatial? And is there an art form that works well in both the provinces of time and space?


"...Nothing could violate this long-held aesthetic taboo more directly than comics, a kind of picture-writing—the very layout of a comics artist’s page insists on pulling the reader from one drawing to the next. (Lynd) Ward also trafficked in time, of course, but by inviting the eye to rest on each isolated composition—unsullied by written language—he was sneakier about it..."