Miraj, Where almost everyone seemed to be on my Facebook

Laurie Penny: The tragedy of The Social Network is also the intimate tragedy of an age whose self-alienation has nothing to do with social networking. The paranoid atomisation of modern social relations has, in fact, very little to do with the internet at all. It has everything to do with a global economic machine that trains human beings to understand one another as manipulable objects or faceless consumers. That, unfortunately, is a trend that did not start on Facebook.

Recently, I removed many "friends" from my FB. Not that I had many, either there or in real life, to begin with.

1. I already have a meaningful relationship with the person in real life. Facebook doesn't add any value.

2. I had a wholesome relationship with the person in the past but the time and distance have created a barrier, Facebook can't help cross.

3. I have no substantive interaction with the person even in cyber world.

4. I had sent them a friendship request based on some interaction on e-mail. I was hoping to transform those interactions into something more substantial. It didn't happen for many weeks.

5. People who sent me a friendship request because I was in their address book and they thought I was their fan. They have no interest in me whatsoever. All they want is their own promotion.

6. Relatives who are not much interested in me as a person. Or if they are, they got axed because points 1 or 3 above.

Facebook for me now is just a depository of links to what I like on WWW and collating of my interests. People say FB is the future. Maybe. But not for me.

RACHEL MARSDEN: The term friend has been linguistically inflated through social media to the point of having almost no value...Too many people seem to be grasping for ways to connect with others while rarely actually connecting in a way that has true value or significance.

Miraj was a friend where Facebook would be such a waste. Like a large open sewer that lay about 100m from our house. 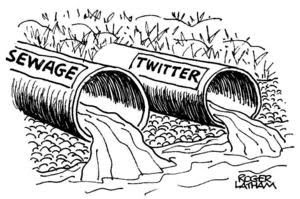 Cartoonist/Illustrator: Roger Latham, The Spectator, October 2010
Posted by Aniruddha G. Kulkarni at 9:00 AM 1 comment: Links to this post