"...Should all Maharashtrians be collected together into one Maharashtra State? Should all Andhra areas be put into one Andhra State? This question of consolidation does not merely relate to new units. It relates also to the existing linguistic provinces such as U.P., Bihar and West Bengal. Why should all Hindi-speaking people be consolidated into one State as has happened in U.P.? Those who ask for consolidation must be asked whether they want to go to war against other States. If consideration creates a separate consciousness we will have in course of time an India very much like what it was after the break-up of Maurya Empire. Is destiny moving us towards it? This does not mean that there is no case for linguistic provinces. What it means is that there must be definite checks and balances to see that a communal majority does not abuse its power under the garb of a linguistic State...

("...S B Joshi's book 'Marathi Sanskruti' mobilized my thoughts. He was the first who argued how Andhra Pradesh, Karnataka and Maharashtra were culturally one. I found that thought attractive...")

"...It makes sense for smaller political units, not just in AP but in many other states of the Indian union. It is time for a renewed national conversation about our federalism and the structures which underpin our polity and administration. The churn one witnesses in electoral politics is perhaps an expression of the same transformations which have fuelled the demand for Telangana. A second States’ Reorganisation Commission will also help smaller nationalities like Gorkhaland, which do not have the electoral muscle to force their demand through. More states of the union neither lead to a weaker country nor weaker provinces. Rather, it may well help strengthen the union by democratising it further."

("...Kannada language didn't have its own state until 1956. Karnataka was divided among Mumbai, Madras and Mysore. The Kannada language was enriched by writing done in it by Marathi people like D R Bendre and S B Joshi. These two could easily write in Marathi. But at that time Pune was the centre of Marathi literature. If they were to write in Marathi, then they would be known as 'Marathi writer from Dharwad'. Therefore, they wrote in Kannada...")

Looking at all that is happening in the country on the issue of Telangana, I feel sad and confused.

I have always questioned the wisdom of dividing this country based on the language.

I am supported by the strong words of Durgabai,

(...but this linguistic division has increased ill will towards each other. Our mind has been constricted by it...)

Durgabai praises S B Joshi's book at least at one more place (page 27) in the book saying it is an excellent book. (I don't know if it's a coincidence but Dr. Irawati Karve इरावती कर्वे was not very fond of the book!)

I thought the book was surely out of print. It almost is but lucky me, Bookganga.com still had copies in October 2013 of its second edition dated August 1980, edited by Vasant S Joshi (वसंत स. जोशी), published by Venus Prakashan (व्हीनस प्रकाशन). That 294-page book was available only for Rs. 170. An absolute steal! 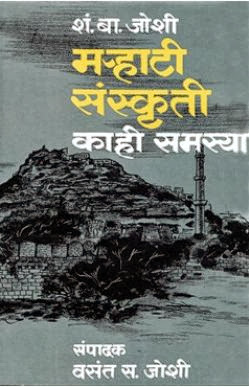