Speck Upon Which the Sun Never Sets Survives

"Where empire civilized the British, it will further barbarize us (USA)."

John Gray:
“Humans thrive in conditions that morality condemns. The peace and prosperity of one generation stand on the injustices of earlier generations; the delicate sensibilities of liberal societies are fruits of war and empire.”


Arthur Herman. ‘How the Scots Invented the Modern World: The True Story of How Western Europe's Poorest Nation Created Our World and Everything in It’, 2001:
“…By 1758, Horace Walpole, the son of the former prime minister, had to admit “Scotland is the most accomplished nation in Europe.” Voltaire agreed: “It is to Scotland that we look for our idea of civilization.” A central European observer stated that “it is now an incontestable fact that the principal authors who have adorned the British literature in these latter times, or do honour to it in the present days, have received their birth and education in Scotland.” It was as neat an example of reverse cultural imperialism as one can find, and David Hume expressed his pleasure with it in the form of a paradox:

Is it not strange that at a time when we have lost our Princes, our Parliament, our independent Government . . . are unhappy in our accent and . . . speak a very corrupt Dialect of the Tongue which we make use of, is it not strange, I say, that in these Circumstances, we shou’d really be the People most distinguished for Literature in Europe?..”


Martin Kettle, The Guardian, September 19 2014:
"...Independence campaigners will feel gutted this morning. But they came within a whisker of ending the United Kingdom on Thursday. One day, perhaps soon, they will surely be back."


Scotland has decided to stay in the union. Just the union, no longer the empire!

When I first read the old saying "The sun never sets on the British empire", I was amused by the audacity of the person who coined it.

The exact day when the sun stopped setting on the empire was probably sometime in the late 1700s or early 1800s, when the first Australianterritories were added.

“…Mitch Fraas, curator at the University of Pennsylvania’s Kislak Center for Rare Books, Manuscripts, and Special Collections, recently sent me this image and GIF of a moveable toy distributed by the Children’s Encyclopedia in Britain in the early twentieth century. The toy, which doubles as an ad for the encyclopedia, takes the old saying “The sun never sets on the British empire” and represents it physically, through the medium of a spinning wheel.

The Children’s Encyclopedia, one of the first such projects directed exclusively at young people, was first sold in Britain as a serial in 1908..." 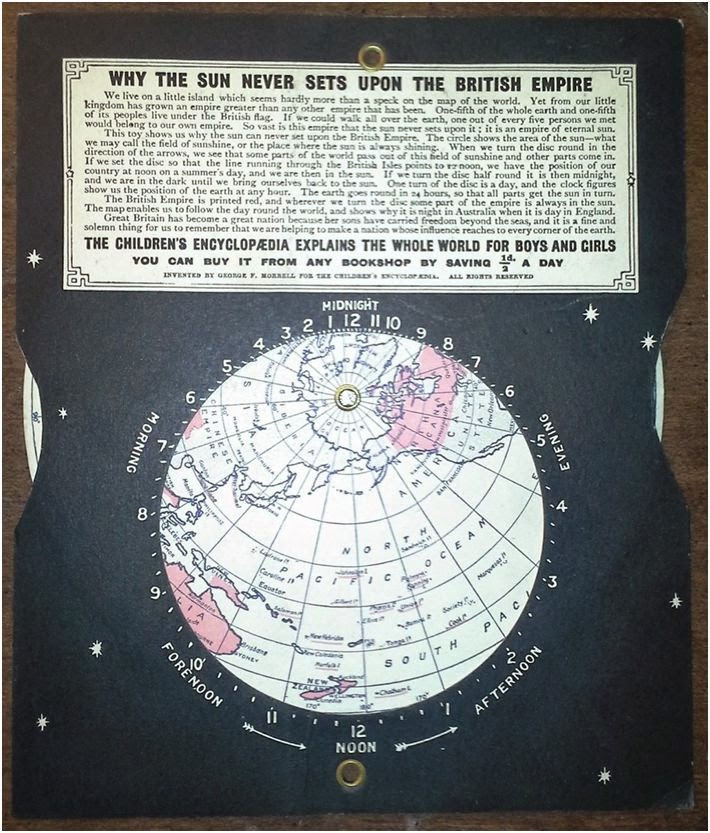 
Read some of the words there:

"We live on a little island which seems hardly more than a speck on the map of the world. Yet from our little kingdom has grown en empire greater than any other empire there has been. One-fifth of the  whole earth and one-fifth of its peoples live under the British flag..."

...And a few more years after 1947, it was said that "the sun doesn't rise on the British empire for days"!

But the sun still never sets upon the British empire.

"...Britain has 14 overseas territories, the direct remnants of empire...The sun never sets on all 14 British territories at once (or even 13, if you don’t count the British Antarctic Territory). However, if the UK loses one tiny territory, it will experience its first empire-wide sunset in over two centuries. Every night, around midnight GMT, the sun sets on the Cayman Islands, and doesn’t rise over the British Indian Ocean territory until after 1am. For that hour, the little Pitcairn Islands in the South Pacific are the only British territory in the sun.
The Pitcairn Islands have a population of a few dozen people, the descendants of the mutineers from the HMS Bounty. The islands became notorious when a third of the adult male population, including the mayor, were convicted of child sexual abuse.
As awful as the islands may be, they remain part of the British empire, and unless they are kicked out, the two-century-long British daylight will continue."
Posted by Aniruddha G. Kulkarni at 9:00 AM No comments: