"Meanwhile, I have been to India – they are very enthusiastic and half-baked and exhausting and Nehru is extraordinary. He knows perfectly well what he is doing: he knows that he applies a double morality, and is not the least ashamed of it; he knows that he is travelling with the Africans and the Asiatics, that Russia is a fellow-traveller, and he thinks on the whole that the West is out. He would like to go more gently than the Chinese, with less massacre, and thinks that his 400 million Indians – a large, soft, pacific, inefficient, heavy mass – will as always absorb all the foreign poisons and work out its own salvation more painlessly, if more chaotically, than the more ruthless and disciplined militarised nations to the East and West of him.
He is tremendously vain, and the fact that the Russians broke through the police cordon at Tashkent and swarmed round him and showed genuine warmth of feeling moved him profoundly, and he has been a friend of the Russians ever since; he similarly adores the Japanese, who showed similar feeling; as for the English, his whole political outlook – the playing by ear, the occasional unscrupulousness, the empiricism, the disdainful reference to Marxism as interesting in the nineteenth century but obviously too crude for us today – all that is very England-derived. He is touchy, he is self-conscious, and like everyone else in the world he wants recognition. There is no doubt that Hegel had the profoundest insight of anyone when he realised [that] what people want more than anything else in the world is to be recognised – whether they are individuals or nations or classes – and that all aggression derives from a wound to that particular craving. When Nehru began speaking of his surprise that some third-rate Indian film had had a wild success in Moscow, where everybody was singing the tunes, his face glowed more than at any other point in our long interview; when the Indians at my conference were told that the Russians esteemed Tagore as one of the greatest poets in the world, that a medal was struck in his honour, and four stamps, and that 60,000 schoolchildren etc., they were far better pleased than by any other single thing which had been said.
The Indians want to be treated as a new exotic culture, whose poets are the best in the world, whose novelists outshine Proust, people who dazzle if they are looked up to, and the whole British connection therefore – and in a sense too much about them is known, they have not been behind a wall like China or Japan or Central Asia, it is a nuisance to them – they would like to start life again.
It is extraordinary to me that anyone should be surprised about Goa (I say, suddenly changing the subject). The thought that Nehru or anyone in Asia believes in rules or principles, even on the ground of expediency, because it is a labour-saving device and likely to produce favourable conditions for development at a lesser price than power politics, must be off his head. Nehru does not seem to me to have the slightest respect for the United Nations, but looks on it as I find myself unconsciously looking at it, as an instrument registering the shifts in the balance of power, and not an entity possessing some kind of deliberative or executive character of its own. Nehru is infinitely sensitive to public opinion, but the public opinion that he recognises is in the first place that of India itself, then Asia, then Africa, then the Iron Curtain countries, and the West hardly at all. Naturally, since America is powerful, it must be kept in with, and he greatly enjoys his encounters with the West – he likes them individually, he is intrigued by them, adores flirting with handsome Western ladies like a Samson who practises brinkmanship with a number of formidable Delilahs, and he loves Western company. Something like Roosevelt – a man who has betrayed his class and has become a popular idol – he delights in his own virtuosity, and has before his eyes constantly the fate of the Kuomintang – an ossified nationalist party which rotted away until it fell before Communism. Hence the extraordinary position of Menon, whom he keeps by his side, not only, I think, because he is tied to him by sentimental bonds, but also in order to prevent himself from selling out or appearing to sell out to comfort, appeasement, respectability, a cosy semi-capitalist regime which, he perfectly realises, means stagnation and ultimately collapse and defeat. At any rate, that is my reading of his complex and peculiar character...."
('Building: Letters 1960-1975')


“The song was written in the Urdu language by lyricist Shailendra and sung by Mukesh. "Awaara Hoon" immediately struck "a chord in audiences from various classes and backgrounds all over India and beyond: in China, in the Soviet Union, in the Middle East." In China, "both the song and film were said to be Chairman Mao's favourites." In a May 2013 BBC poll, the song was rated the second-greatest Bollywood song of all time.” 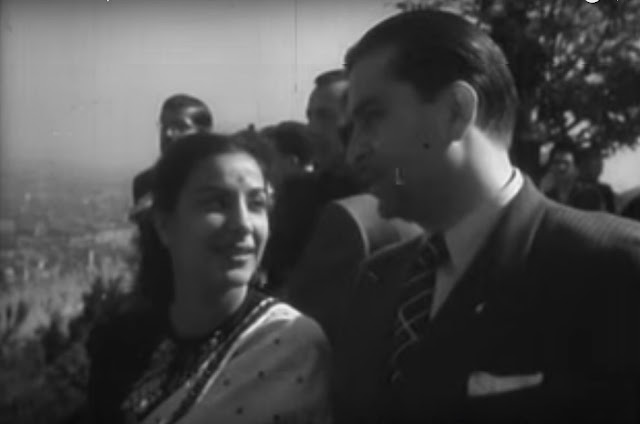 सौजन्य : युट्यूब
Posted by Aniruddha G. Kulkarni at 9:00 AM 2 comments: Links to this post