Behind a Thousand Veils: Snub-nosed Woman Wearing Anklets of Footnotes

John Keats "...with a great poet the sense of Beauty overcomes every other consideration, or rather obliterates all consideration."

Carl Jung:“What is so staggering about ‘Ulysses,’ is the fact that behind a thousand veils nothing lies hidden; that it turns neither toward the mind nor toward the world, but, as cold as the moon looking on from cosmic space, allows the drama of growth, being, and decay to pursue its course.”

Ron Rosenbaum:"You won’t have to worry about opening a greeting card and seeing “We must love one another and die.” Not a Hallmark moment.But this change still didn’t satisfy Auden, who seems to have genuinely feared for his reputation as a complex and serious poet if “We must love one another or die”—in any version—continued to be his most quoted legacy. And so he kept attacking it whenever he spoke or wrote of it, banning the stanza from publication. (The stanza in which the line occurs is admittedly not his best, concerning itself as it does with the poet speaking truth to power in a self-congratulatory way.)But there I go, adopting Auden’s retroactive self-loathing of the line, and I’m not sure it was such a crime against poetry. Must we ban from our minds a burst of emotional earnestness from a poet whose frequent acerbic ironies makes it all the more salient? Has self-consciously highbrow culture made such a fetish of complexity, ambiguity, and obscurity as a measure of worth that we condemn or condescend to more simple, heartfelt exclamations? Don’t we feel a “sharp tender shock” at the original line? Is it always more mature and serious for a poet to be riddled by doubt and conflict, rather than to give way to transcendence?..."

I had always felt that B S Mardhekar (बा सी मर्ढेकर) was far more influenced by W H Auden than Marathi saint-poets Tukaram (तुकाराम) and Samarth Ramdas (समर्थ रामदास). I was happy to read later that Vilas Sarang (विलास सारंग), my favourite literary critic, too felt something similar.

I don't know how Mardhekar felt about Auden's easily 'comprehensible' line: 'We must love one another or die' from his poem '1 September 1939'.

Was he startled by this 'heartfelt exclamation', its simplicity, its sentimentality?

For the former- again much like Joyce- he was tried, on the latter, he was advised by some to annotate his own work!

He didn't oblige and instead wrote:

"If one has some command of the words and has rhythmic expression, writing poetry is not very difficult. If there is anything more to it or not will be decided by the reader alone. If his opinion is not favourable, the writer should learn the right lesson. But making a snub-nosed woman play the role of Sharada by wearing the hat of a 'role' and the anklets of footnotes is certainly not a solution."

Was this rebuttal so straight forward for Mardhekar? Had he made 'a fetish of complexity, ambiguity, and obscurity' and 'indulged' in them?

I suspect a little.

For me, Mardhekar is more complex, ambiguous, and obscure than Auden. It need not have been so. Like Auden, he should have written more and easier to understand poems. Like Arun Kolatkar (अरुण कोलटकर) later did.

The late M V Dhond's (म. वा. धोंड) Marathi book 'Tarīhi Yeto Wasa Phulānnā', 1999 (तरीही येतो वास फुलांना) and articles on his poetry have tried to lift the veil from some of them but many still remain a challenge for me.

For instance, I don't get most of this:

Like Auden, his choice of everyday words suck me in, hold me captive and, therefore I tend to remember them, but what do they mean collectively?

In fact, in one of my telephonic conversations with Mr.Dhond, I had sought his help by requesting him to interpret all Mardhekar's poems from 'kahee kavita' (कांहीं कविता) and 'aanakhee kahee kavita' except a few! He just laughed.

Now, who would think of poetry-like complexity, ambiguity, and obscurity in cartoons?

I quite liked them in the following one brought upon by Pythagorean theorem!

Mr. Steinberg was no less talented than James Joyce. 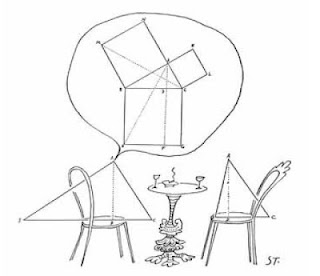