Barring Accidents, the Sun will Rise on January 1 2013

John Crowley:
"Meanwhile the real world then, no matter what, will be as racked with pain and insufficiency as any human world at any time. It just won’t be racked by the same old pains and insufficiencies; it will be strange. It is forever unknowably strange, its strangeness not the strangeness of fiction or of any art or any guess but absolute. That’s its nature. Of course holding the mirror up to nature is what Hamlet insisted all playing, or pretending, must do; but—as Lewis Carroll knew—the image in a mirror, however scary or amusing or enlightening, is always reversed."

"If clock time isn’t real, what is time, anyway? We don’t understand time, and we definitely don’t want to admit that our allotment is limited. We just want to get on with our day."

“You never know when an old calendar might come in handy. Sure, it’s not 1985 now, but who knows what tomorrow will bring?”

"Philosophers have always tried to show that we are not like other animals, sniffing their way uncertainly through the world. Yet after all the work of Plato and Spinoza, Descartes and Bertrand Russell we have no more reason than other animals do for believing that the sun will rise tomorrow."

According to the Hindu mythology "we are in the KALI YUGA, or Iron Age a period of decline. It was preceded by the ages of gold, silver, and bronze. After the end of the KALIYUGA and a short hiatus, a new age will begin: the age of truth (KRITA YUGA), when all the wickedness, strife, and dissension of this era will be replaced by righteousness. It is understood that this age will be ushered in by Kalki, the future
incarnation or AVATAR of VISHNU, riding on a magnificent white horse."

('Encyclopedia of Hinduism' by Constance A. Jones and James D. Ryan, 2007)

I have often wondered will this new age accompanied by Kalki riding in on a magnificent white horse will happen on  January 1 of a year or on a Gudi Padwa day. Or will it happen on a random day?

I know one thing: with each passing year, I am unlikely to witness that grand event!

Or is that I am already living in KRITA YUGA but being too much of a pessimist to realise it? Or is this a 'short hiatus'? 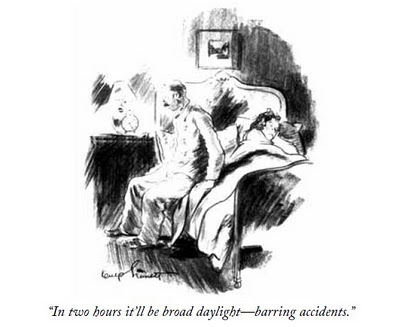 Artist: Kemp Starrett, The New Yorker, January 13 1934
Posted by Aniruddha G. Kulkarni at 9:00 AM No comments: Links to this post