I Should Learn to Look at an Empty Sky unless……..

Something you read makes you introspect very deeply. You know it’s going to happen long after you are gone but the feeling still doesn’t leave you.

I got that feeling when I read DENNIS OVERBYE’s essay “The Universe, Expanding Beyond All Understanding” (NYT June 5, 2007)

“When Albert Einstein was starting out on his cosmological quest 100 years ago, the universe was apparently a pretty simple and static place. Common wisdom had it that all creation consisted of an island of stars and nebulae known as the Milky Way surrounded by infinite darkness.

We like to think we’re smarter than that now. We know space is sprinkled from now to forever with galaxies rushing away from one another under the impetus of the Big Bang.

Bask in your knowledge while you can. Our successors, whoever and wherever they are, may have no way of finding out about the Big Bang and the expanding universe, according to one of the more depressing scientific papers I have ever read.

If things keep going the way they are, Lawrence Krauss of Case Western Reserve University and Robert J. Scherrer of Vanderbilt University calculate, in 100 billion years the only galaxies left visible in the sky will be the half-dozen or so bound together gravitationally into what is known as the Local Group, which is not expanding and in fact will probably merge into one starry ball.

Unable to see any galaxies flying away, those astronomers will not know the universe is expanding and will think instead that they are back in the static island universe of Einstein.

It is hard to count all the ways in which this is sad. Forget the implied mortality of our species and everything it has or has not accomplished. If you are of a certain science fiction age, like me, you might have grown up with a vague notion of the evolution of the universe as a form of growing self-awareness: the universe coming to know itself, getting smarter and smarter, culminating in some grand understanding, commanding the power to engineer galaxies and redesign local spacetime.

Instead, we have the prospect of a million separate Sisyphean efforts with one species after another pushing the rock up the hill only to have it roll back down and be forgotten.

Worse, it makes you wonder just how smug we should feel about our own knowledge.”

Looking up at the stars, I know quite well
That, for all they care, I can go to hell,
But on earth indifference is the least
We have to dread from man or beast.

How should we like it were stars to burn
With a passion for us we could not return?
If equal affection cannot be,
Let the more loving one be me.

Admirer as I think I am
Of stars that do not give a damn,
I cannot, now I see them, say
I missed one terribly all day.

Were all stars to disappear or die,
I should learn to look at an empty sky
And feel its total darkness sublime,
Though this might take me a little time. 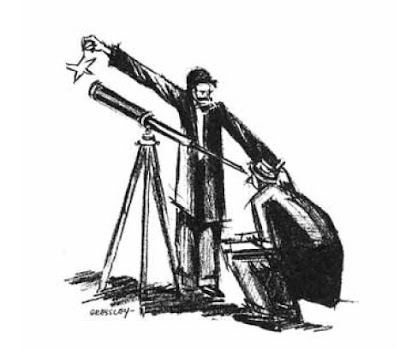 Did Natives Create The Bountiful Art You See In Maharashtra?

The latest article is “Grandeur in caves”. Article covers “vast rock-cut temples and viharas dot the hills of western and eastern India”.

“Does Maharashtra have its Own Distinct Culture?” was the title of an essay by Prof S M Mate in 1954. A debate raged on the subject, joined by number of experts like sculptor V P Karmarkar, K Narayan Kale, Irawati Karve, H.D Sankaliya. One offshoot of the debate was if locals created the art you see all around in Maharashtra.

I haven’t heard of such a debate elsewhere in India except perhaps in Assam. People elsewhere presume locals created the art. Maharashtra and Marathi have perhaps been more melting pots than others and hence the debate.

The then Maharashtra often used to have such raging debates. What fun! See an earlier entry on the related subject of literary feuds here.

This blog keeps returning to the one and only D G Godse द ग गोडसे. See previous entries on Godse here.

Godse’s verdict- Yes, natives largely created the art you see in Maharashtra. He aks “why 90% of all Indian carvings are in Maharashtra?” and explains this abundance ”…. this is not just because of the ruling dynasties of Maharashtra –Shalivahan, Vakatak, Chalukya, Rashtrakut-but also because of patronage of art by ordinary people”.

Frontline says: “IN western India, the 2nd century B.C. ushered in one of the greatest periods of the art of India and the entire art of Buddhism. Over a period of about 1,000 years, more than 1,200 caves were hewn out of the mountains of the Western Ghats, not very far from the coast of present-day Maharashtra. They were profusely sculpted and painted in the Buddhist traditions. Leaving behind the cares and confusions of the material world, the devotee came to these splendid havens of contemplation…”

My parents shifted residence to Nashik in late 80’s. The best place I found at Nashik was what locals call “Pandav Leni” sculpted in 2nd century during Satavahanas (see picture below). Once I went up there, I never felt like coming down. I imagined how it must be almost two millennia ago. People,looking just like me, taking in breeze, contemplating both every day issues and life-after. 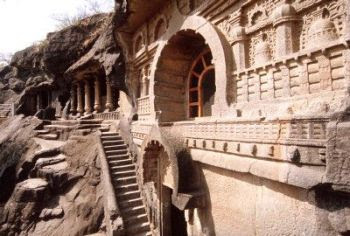 And I haven’t seen more vivacious and sexier woman than this 2nd century beauty!