Paul Koudounaris:
“Pushed into the footnotes of European religious history, charnels were once part of a dialogue with death that has now fallen silent. For the people who constructed them, however, the dialogue was loud and clear, and the dead were not expected to be mute.”
"Then I saw again all the oppressed who are suffering under the sun, and beheld the tears of the oppressed, and they had no comforter, and with their oppressors there was violence, and they had no comforter; and I esteemed the dead happy who have died long ago, more than the living who are still alive; and happier than both, him who hath not been born."

"Greek drama is being performed on both the commercial and amateur stages of Britain, as of the world, with greater frequency than at any point since classical antiquity. At times during the 1990s more plays by Euripides or Sophocles were available to the London theatre-goer than works by any other author, including Shakespeare." 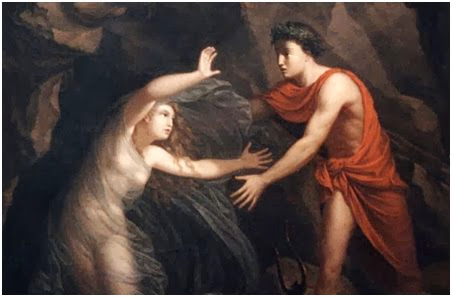 "...Several months later, I was sitting in a theater watching Sarah Ruhl’s play Eurydice. After marrying Orpheus, Eurydice dies. In the underworld, there is a chorus of stones that addresses the audience.

Eurydice wants to speak to you.
But she can’t speak your language anymore.
She talks in the language of dead people now.

This was it. Further to the communiqué I had received at my mother’s grave, and to my problem with poetry while mourning.
The play said: elegies are false. They think they can talk to the dead, but dead people speak in the language of the dead, and we can’t."

Here is an example given by GA of how dead people perhaps speak.

"...You are wrong. Knowing is one thing and experiencing the death in one's own flesh and bones another. You did not experience it; I have experienced it...")