He was probably the only modern Marathi ‘great’ who appreciated the art of cartooning. No one else- e.g. P L Deshpande पु ल देशपांडे, Jaywant Dalwi जयवंत दळवी who were humourist themselves- came even close.

Apart from Sarwate, Tendulkar was very fond of the art of young cartoonist Abhimanyu Kulkarni अभिमन्यु कुलकर्णी. In a Marathi letter to Abhimanyu, he wrote :”…the way a good bowler bowls six good balls in an over, sometimes your cartoons are in an issue of Lokprabha लोकप्रभा…”

Like Durga Bhagwat दुर्गा भागवत, Tendulkar liked the work of Natyachhatakar Diwakar नाट्यछटाकार दिवाकर, the most under rated writer in Marathi.

I like a lot of what Tendulkar wrote but his play “Kanyadan” कन्यादान and his essays on Raj Kapoor, Baba Amte बाबा आमटे, his own father, the theatre of the absurd and the death row inmates remain my favourite.

In “Kanyadan” (Giving away of daughter in marriage), he exposes hypocrisy of upper-caste Maharashtrian middle-class.

Tendulkar was fearless the way he took on Bal Thackeray बाळ ठाकरे and other politicians without batting an eyelid. See a related post here.

I will miss you Tendulkar-sir because…

"...Instead of using bellybutton on stomach as pupil-less eye to grow-inflate tummy and lead insensitive life, you were always conscious that the real eyes were attached to the face..."

There must be a commotion wherever Vijay Tendulkar now has gone … 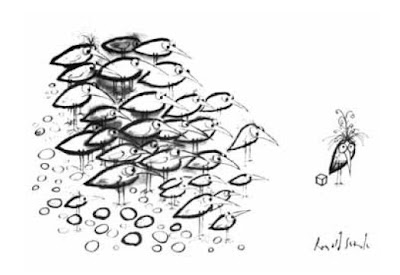 This picture has no caption. If I were to give one...

"She like Vijay Tendulkar is so beautiful but watch out for her claws!"
Posted by Aniruddha G. Kulkarni at 12:45 PM 3 comments: