I liked my stay and travel to Assam and Arunachal Pradesh for their somnolence. There were empty parts of the day, of the week, of the year; times when there were no people around, no traffic in the streets, no audible human voices, now and then no sound at all.

I used to have similar experience as a child just behind our home at Miraj. Other than a stray dog or a passing bicyclist, nothing happened when I planted my self on a branch of Tamarind tree. Some people talked about ghosts on the trees. Ghosts seem to prefer somnolence and that was all right by me. I even liked reading books with pictures that gave the impression of somnolence like Chandamama(Chandoba in Marathi)or Phantom(Vetal in Marathi).

PAUL THEROUX (according to me one of the only three Americans who understands India-Mark Twain, J K Galbraith are the other two) has written about this in the essay “America the Overfull” (NYT December 31, 2006):

“A longing for a simpler world, for a glimpse of the past, is one of the motives in travel……… Travel, except in almost inaccessible places, is no longer the answer to finding solitude. And this contraction of space on a shrinking planet suggests a time, not far off, when there will be no remoteness: nowhere to become lost, nothing to be discovered, no escape, no palpable concept of distance, no peculiarity of dress — frightening thoughts for a traveler……. We are passing through a confused period of aggression and fear, characterized by our confrontational government, the decline of diplomacy, a pugnacious foreign policy and a settled belief that the surest way to get people to tell the truth is to torture them. It is no wonder we have begun to squint at strangers. This is a corrosive situation in a country where more and more people, most of them strangers, are a feature of daily life. Americans as a people I believe to be easygoing, compassionate, not looking for a fight. But surely I am not the only one who has noticed that we are ruder, more offhand, readier to take offense, a nation of shouters and blamers.”

NOAM COHEN has written about crawling crowds on the Mount Everest in “Conquering the Peak Test of Technology” (NYT June 18,2007).
Mobile phones, PDA’s but not Laptops now seem to work at the top of the Mount Everest. Base camp looks like “ a Hollywood production set, with all its flat-screen TVs and generators.” 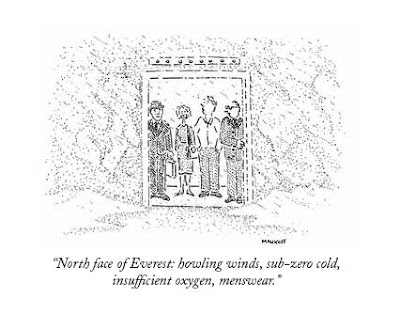 Artist: Robert Mankoff The New Yorker 5 Sept 1988
Posted by Aniruddha G. Kulkarni at 1:29 PM No comments: Links to this post

What is common to Bhopal’s MIC (Methyl Isocyanate) and Vietnam’s Agent Orange?

Bhopal gas tragedy of 1984 killed between sixteen thousand and thirty thousand and injured around five hundred thousand. No court of law passed judgment on Union Carbide for the crime it committed in Bhopal.

Union Carbide’s legal team argued that an American court was not competent to assess the value of a human life-life that lives in shacks-in the Third World. Wall Street Journal wrote: “An American life is worth approximately five hundred thousand dollars. Taking into account the fact that India’s gross national product is 1.7% of the US, the Court should compensate for the decease of each Indian victim proportionately, that is to say, with eight thousand five hundred dollars”.

The Economist (25 November 2004) says: ” TWENTY years after lethal gases from a Union Carbide pesticide factory billowed across a densely populated shanty town in the Indian city of Bhopal, both the dilapidated plant and its highly contaminated surrounding areas stand as monuments to governmental and corporate inaction. Compensation has still not been fully paid to over 500,000 victims, the plant has not been dismantled and toxic waste estimated to amount to several thousand tonnes remains on the site, polluting local water supplies. Legal cases are continuing in both Bhopal and New York against the American company, which was taken over by Dow Chemical in 2001, and against Warren Anderson, Union Carbide's chairman in the early 1980s, whom India has tried and failed to extradite …..……. Dow Chemical, together with its Union Carbide subsidiary, denies responsibility for victims' health or the state of the site, following an overall settlement reached in 1989 with the Indian government. The claims totalled $3 billion, but the government settled for $470m (then worth 7.5 billion rupees) plus a further $43m in rupees. A criminal case is in progress in Bhopal, and a New York court has yet to decide whether the company should be ordered to clean the site, in addition to paying out more for health problems. Payment of the $470m compensation to victims and those suffering ill health has been slow, mired in bureaucratic delays, judicial appeals and corruption. Eventually, by late last year, most of the 570,000 confirmed victims had received payments averaging 25,000 rupees. That left 15.6 billion rupees (at current dollar values), which is being distributed on orders issued last month by India's Supreme Court.”

DANIELLE TRUSSONI’s writes (NYT June 18, 2007 “End Vietnam’s Air War”): “……United States sprayed about 19.5 million gallons of Agent Orange and other toxic herbicides over the jungles of South Vietnam…… Today the federal Court of Appeals for the Second Circuit, in Manhattan, is scheduled to hear oral arguments against Dow, Monsanto and 35 other companies that manufactured Agent Orange and related herbicides used during the Vietnam War. In addition, 16 appeals by American veterans will be heard, as well as an appeal by a group that represents Vietnamese victims of Agent Orange……. Perhaps now, after 40 years, the victims of Agent Orange will finally get such recognition.”

Better luck to American veterans and Vietnamese peasants! As per CIA’s website GDP of Vietnam (2006 est.purchasing power parity) is 2% of USA. Therefore, Vietnamese should expect only 2 dollars for every 100 Americans get as compensation,if any!

Wikipedia says: “The term military-industrial complex refers to a close and symbiotic relationship among a nation's armed forces, its private industry, and associated political and commercial interests. In such a system, the military is dependent on industry to supply material and other support, while the defense industry depends on government for revenue. The term is most often used in reference to the United States, where it gained popularity after its use in the farewell address of President Dwight D. Eisenhower.” 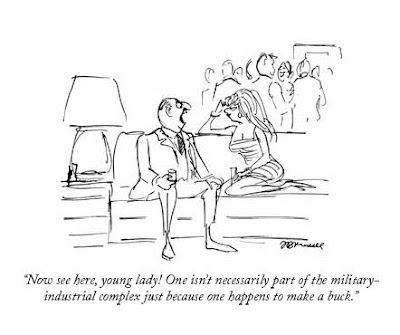 Artist: Frank Modell The New Yorker 28 Sept 1968
Posted by Aniruddha G. Kulkarni at 12:00 PM No comments: Links to this post