Is 'Positive Thinking Talk' in Marathi TV Serials a Cheap Import from USA?

Joseph Conrad: “The fact is you want more scepticism at the very foundation of your work. Scepticism the tonic of minds, the tonic of life, the agent of truth- the way of art and salvation.”

While surfing cable TV, I often pause on Marathi channels, showing sitcoms, to find out what they are upto.

Every now and then, I meet a character that says: "Everything will be OK/ it will all get sorted out/ All will work out in the end."...In fact, these must be the most spoken statements in a Marathi soap.

Almost every character- hero/villain, old/young, male/female, rich/poor, being borne/dying, healthy/sick, Brahmin/Dalit, Hindu/Muslim- ends up saying it a few times during his/her life time in the drama.

Is this behaviour part of Marathi / Indian culture? I am not sure because I have not heard this with so much frequency in real life?

When I read Marathi books or watch Marathi cinema of previous eras, these smiley-faced talkers, bleating sentimental cant and wishful thinking, are hard to find.

From where do they come? USA?

"GREED — and its crafty sibling, speculation — are the designated culprits for the financial crisis. But another, much admired, habit of mind should get its share of the blame: the delusional optimism of mainstream, all-American, positive thinking...

...Positive thinking is endemic to American culture — from weight loss programs to cancer support groups — and in the last two decades it has put down deep roots in the corporate world as well. Everyone knows that you won’t get a job paying more than $15 an hour unless you’re a “positive person,” and no one becomes a chief executive by issuing warnings of possible disaster...

...Americans did not start out as deluded optimists. The original ethos, at least of white Protestant settlers and their descendants, was a grim Calvinism that offered wealth only through hard work and savings, and even then made no promises at all. You might work hard and still fail; you certainly wouldn’t get anywhere by adjusting your attitude or dreamily “visualizing” success...

...When it comes to how we think, “negative” is not the only alternative to “positive.” As the case histories of depressives show, consistent pessimism can be just as baseless and deluded as its opposite. The alternative to both is realism — seeing the risks, having the courage to bear bad news and being prepared for famine as well as plenty. We ought to give it a try."

"...As Ms. Ehrenreich disapprovingly explains, positive thinking has saturated not just American religion but also corporate life and popular culture, and it is rapidly soaking into modern psychology. The problem for her is that people who are insistently reciting inspirational phrases won't hear the siren's wail in time to save themselves. Ms. Ehrenreich cranks her indignation up highest when aiming at the bankers, economists, bureaucrats and business honchos whose near-hallucinatory positive thinking, she believes, has pushed us all to the brink of economic collapse..."

Another example of the kind of Marathi that gets spoken in Marathi soaps:

Marathi people never greeted like this as long as I remember! Maybe they do now.

Bambooque of Avadh Punch would confirm our status as America-returned, newly-made gentleman & noisy Jee-Huzoors pretending to have forgotten our native tongue during our brief stay in America. He would describe us as "the personification of false hopes, the embodiment of extravagant expectations and the incarnation of utterly vain delusions." 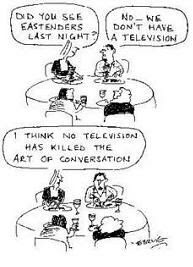 The Spectator
Posted by Aniruddha G. Kulkarni at 11:00 AM No comments: