G. C. Lichtenberg: "That man is the noblest creature may be inferred from the fact that no other creature has contested this claim."

Every morning I walk past two big stinking garbage heaps located on the main street of a Pune suburban where I live.

They are less of garbage dumps and more of zoos in early morning hours.

Crows, dogs, cows, pigs, donkeys, goats and, I am sure, rodents, roaches and other forms of life feast there.

The other day I saw the donkey herdsman driving away cows saying to himself how his donkeys deserved to eat there more than the 'bloody' cows.

Poor cows- who are never accompanied by their herdsman- stood there confused, not knowing what to do next!

"...It is unlikely anyone has ever come to this city and commented on how clean the streets are. But this litter-strewn metropolis is now wrestling with a garbage problem so severe it has managed to incite its weary residents and command the attention of the president...

...But the crisis should not have come as a surprise.

When the government killed all the pigs in Egypt this spring — in what public health experts said was a misguided attempt to combat swine flu — it was warned the city would be overwhelmed with trash.

The pigs used to eat tons of organic waste. Now the pigs are gone and the rotting food piles up on the streets of middle-class neighborhoods...

...“They killed the pigs, let them clean the city,” said Moussa Rateb, a former garbage collector and pig owner who lives in the community of the zabaleen. “Everything used to go to the pigs, now there are no pigs, so it goes to the administration.”..." 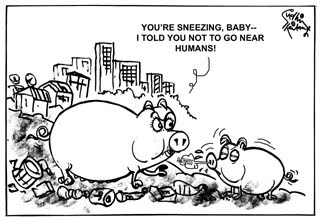