Our Sharakka Joshi, Kittur Chennamma and their Kannada

However, I know a bit about many other parts of India and my most favourite region is North Karnataka, erstwhile 'Bombay Karnataka'.

And it is not just about some of the finest artistic talent of India it produced-Annasaheb Kirloskar, Bhimsen Joshi- I like his spoken Marathi as much as his singing, Kumar Gandharva, Gangubai Hangal, Mallikarjun Mansur, Basavaraj Rajaguru, Sawai Gandharva, G A Kulkarni, Setu Madhavrao Pagdi, Girish Karnad...or places like Badami and Gol Gumbaz...

For sure, it has a lot to do with Sharakka Joshi (शारक्का जोशी), our neighbour in Miraj (मिरज), who pampered us with excellent idlis, dosas, a kind of dadpe-pohe (दडपे-पोहे) and appe (अप्पे), mande (मांडे ) and kadabu (कडबू )...(I didn't much like her Chitranna though)... Not to mention their family's delightful Kannada-Marathi. (When I started reading Gurunath Abaji Kulkarni 'GA', I was already familiar with the format of his language because Sharakka's husband- Gurunath- used to speak the same!)

But probably deeper reason for my affection is well summed up by the late Shankarrao Kirloskar (शंकरराव किर्लोस्कर) writing a letter on his last days in Ghataprabha in Karnataka, away from Pune and Marathi:

I have already written about our family's trip in 1974 to North Karnataka here. As trains shut down, we were forced to take state transport buses. As expected the buses became overloaded. There sure was some pushing and shoving but the most common Kannada phrase we heard from our co-passengers was 'Swalp-sari' (स्वल्प-सरी) "move just a little". Almost poetic, like in Japan!

We learnt a few words of Kannada interacting with Sharakka's extended family. In 1981, I thought I was familiar with the language.

Later in the year at IIT Madras hostel 'Alaknanda', when I first heard a bunch of Karnataka guys conversing in Kannada, I was confident that I would get a sense of their topic of discussion.

I did not understand a word! Likely reason: They were from Mysore-Karnataka and were speaking in Mysore-Kannada.

It made tragi-comic reading for me.

"...Old Mysore includes Bangalore, Mysore, Kolar, Tumkur, Chitradurga, Shimoga and Hassan but not parts like Bellary and Coorg. The subject matter of Kannada films and the heroes of Kannada popular cinema are always people who come from Old Mysore. It is not possible for a Kannada film hero to have a romance with someone from Raichur or Gulbarga...

...Look at a more recent super-hit film, Mungaru Male [2006]. I think the Kannada hero does not marry the Kodava heroine simply because Coorg is not part of Old Mysore. There were other reasons given in the film, but they were simply unconvincing. It's very similar to Aamir Khan not marrying the white heroine in Rang De Basanti [2006]. You cannot have a romance between somebody from the nation and someone from outside because the nation draws a line around itself.

Similarly, Kannada has to draw a line around the region which is of Old Mysore. Since it draws this line, someone from Coorg will be outside the nation...

Look at the political leaders in Karnataka. Most of them come from Old Mysore. And look at the state of development, north Karnataka is backward when compared with Old Mysore. Even a film like Schoolmaster (1958) – an early classic which challenged caste identity – could not enlarge the Kannada nation..." 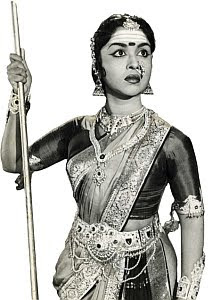 Courtesy: THE HINDU ARCHIVES and The Frontline

This beautiful picture is of B. SAROJA DEVI as Kittur Chennamma.

Wiki informs: "Chennamma was born in Kakati, a small village in the wealthy kingdom of Kittur, which stood around 5 km north of Belgaum in Karnataka."

Chennamma, a great Indian whose statue stands at the Indian Parliament Complex in New Delhi, surely spoke North Karnataka dialect of Kannada, the one spoken by our Sharakka, her family and many of the fellow great Indians named in this post.

Most likely she knew some Marathi because she was married to Raja Mallasarja of the Desai marathas family that ruled Kittur which had large number of Marathi-speaking subjects and Kittur was part of Maratha empire for a while. 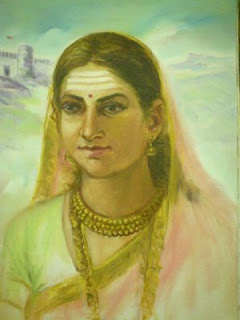 So what language do we hear in the movie 'Kittur Chennamma', 1962?

According to M.K. Raghavendra: "...Old Mysore has usurped Kannada cinema, and there is no such pan-Kannada feeling if you look at Kannada cinema. I'll give you a couple of examples to argue my position. Look at Kittur Chennamma [1962], a film about Chennamma, a freedom fighter who led a rebellion against the British in 1824. She came from somewhere near Belgaum, but if you look at the film, you have Chennamma who speaks [the] Mysore [dialect of] Kannada but the treacherous ministers who betray her to the British speak Belgaum Kannada."

(An anonymous reader of this blog has disputed this claim of Mr. Raghavendra in October 2011. Please read a comment below.)

I am sure Sharakka, 'ordinary' homemaker, watched the film. I wonder if she noticed this glaring contradiction, if there existed one.

And even if she did, I guess, she was too cultured, too tolerant to mention it. A blue-blooded North Kannadiga!
Posted by Aniruddha G. Kulkarni at 9:00 AM 2 comments: