For centuries the pen remained the supreme guarantor of legal, contractual, epistolary and literary authenticity. Then, during the last century, this role was gradually reassigned to the more “objective” typewriter. In fact, so central was the typewriter to the pursuit of literary Truth that there came a time when, for most American novelists, you simply weren’t a writer unless you had one.

In 1916, T. S. Eliot wrote to a friend about his recent experiments with composing poetry on the typewriter. The machine “makes for lucidity,” he said, “but I am not sure that it encourages subtlety.” A few years later, Eliot presented Ezra Pound with a first draft of “The Waste Land.” Some of it had been composed on the typewriter.

"Many of those terse aphorisms and impenetrable reveries were banged out on an 1882 Malling-Hansen Writing Ball. And a friend of his at the time noticed a change in the German philosopher’s style as soon as he moved from longhand to type. “Perhaps you will through this instrument even take to a new idiom,” the friend wrote. Nietzsche replied: “You are right. Our writing equipment takes part in the forming of our thoughts.”.." 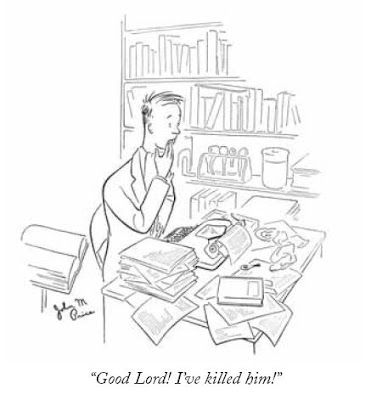 It's Nietzsche who said: God is dead. God remains dead. And we have killed him.

Cartoon caption could read: Good Lord! I have killed you!

"...The factories that make the machines may be going silent, but India's typewriter culture remains defiantly alive, fighting on bravely against that omnipresent upstart, the computer...

...Typing was all but compulsory for any woman who wanted a job, said Geeta Meshran, 53, who banged away for 22 years in the Mumbai government's typing pool. Efficiency wasn't always paramount there. "I often worked as slowly as possible, so I wouldn't have to retype the page," she said...

..."Typewriters were a real symbol of Indian life. Just consider how many laws and birth certificates came from its keys," said Abhishek Jain, who at age 13 set a world record in 1991 typing 117 words a minute on a Godrej manual...

..."The computer is lifeless, but there's a sheer joy in manual typing," said Jain, the record-holder. "It's a kind of music..."

As stated above, was typing all but compulsory for any woman who wanted a job?

I say not just a job but also a marriage.

Pune: Fourteen-year-old Manish (name changed) stabbed his father with a kitchen knife recently and was sent to juvenile custody. What makes this stray case of juvenile crime all the more complicated is that Manish is addicted to sniffing whitener, a cheaper and potentially dangerous way to get high.
According to experts, there are close to 8,000 children in the city who are addicted to substances such as whitener, ink remover, thinner, shoe polish and vulcanising solution..."

To be honest, I like smells of whitener, ink remover, thinner, shoe polish, vulcanising solution, petrol, benzene...But I didn't know I could get high on them.

(When I joined a chemical MNC in 1984, the whole plant 'reeked' of benzene, I never complained!)

Can part of Nietzsche's genius (or madness) be explained by correction fluid?!

"I see you have a degree in shorthand."