Does Marathi have any Third Culture?

TREVOR BUTTERWORTH: "...It is also refreshing, and possibly redemptive, to be reminded of a time when scientists composed poetry—as Charles Darwin's polymathic grandfather, Erasmus, did praise of steel—and when the idea that agronomy and geology and metallurgy were as vital and as exciting as any of the arts." (WSJ, July 30 2010)

W H Auden (imagining what the Athenian might say about the West): "Yes, I can see all the works of a great civilization; but why cannot I meet any civilized persons? I only encounter specialists, artists who know nothing of science, scientists who know nothing of art, philosophers who have no interest in God, priests who are unconcerned with politics, politicians who only know other politicians."

Marcus Chown: I started by asking (Carl)Sagan what he preferred: science or science fiction? Without hesitation, he replied: "Science." I asked him why. "Because science is stranger than science fiction."

Now Madgulkar was a very good lyricist but I always thought the essay was all baloney.

"Afterlife episode or just a brain tick?: Patients who have had a near-death experience often report walking towards a bright light, or a feeling that they are floating above their body - a sensation that has long been interpreted as a religious vision and confirmation of afterlife. Experts now claim it's a surge of electrical activity triggered by the brain in the moments before death, apparent from a study of the brainwaves of dying patients..."

I have read about poet Vinda Karandikar (विंदा करंदीकर) talking about his wife dying peacefully. Is there anything like 'peaceful death'?

ROBIN MARANTZ HENIG: "Will We Ever Arrive at the Good Death?

...What we're addicted to, it seems, is the belief that we can micromanage death. We tend to think of a ''good death'' as one that we can control, making decisions about how much intervention we want, how much pain relief, whether it's in the home or the hospital, who will be by our sides. We even sometimes try to make decisions about what we will die from. This can be valuable, as when a cancer patient with little hope of survival, like Goldie Gold back in mid-July, rejects debilitating chemotherapy. But often, our best-laid plans can go awry. Dying is awfully hard to choreograph..." (NYT, Aug 7 2005)

Such writing gets away without any critical scrutiny in Marathi because it has largely lacked what C P Snow defines as The Third Culture.

Snow's thesis was that the breakdown of communication between the "two cultures" of modern society — the sciences and the humanities — was a major hindrance to solving the world's problems.

Are Marathi artists afraid if they stride two cultures they would spread themselves too thin? Like Leonardo da Vinci from the picture below who strode them all! 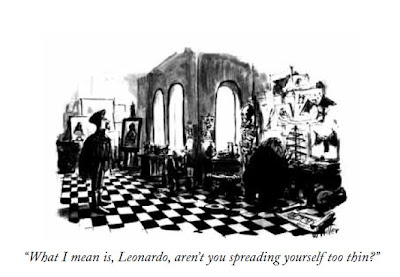