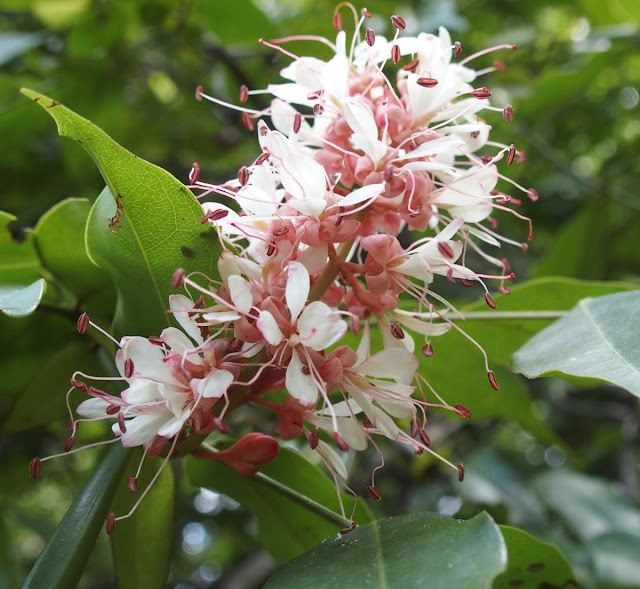 When Alexander von Humboldt was told that a tree from India was named after him -
Humboldtia laurifolia: ‘isn’t that fabulous!!’

Elizabeth Kolbert, The New Yorker, October 2015:
"...“In eight days of reading books, one couldn’t learn as much as what he gives you in an hour,” Goethe said of Humboldt, whom he counted as a good friend. When Darwin finished his own Humboldtian travelogue, “The Voyage of the Beagle,” he nervously sent his hero a copy. “You have an excellent future ahead of you,” the older man reassured him...."

The Prussian naturalist Alexander von Humboldt (1769–1859) is all around us. Yet he is invisible. “Alexander von Humboldt has been largely forgotten in the English-speaking world,” writes Andrea Wulf in her thrilling new biography. “It is almost as though his ideas have become so manifest that the man behind them has disappeared.” Wulf’s book is as much a history of those ideas as it is of the man. The man may be lost but his ideas have never been more alive...."


"... While SIMÓN BOLÍVAR fought bloody battles to break the colonial chains, Humboldt was trying to convince the British to let him travel to India. In order to complete his Naturgemälde of the world, Humboldt wanted to investigate the Himalaya to collect the data he needed to compare the two majestic mountain ranges. No scientist had ever climbed the Himalaya. Since the British had arrived on the subcontinent, it hadn’t even occurred to them to measure these magnificent mountains, Humboldt said. They had just ‘thoughtlessly looked at them without even asking themselves how high these colossal Himalaya were’. Humboldt intended to determine heights, understand geological features and examine plant distribution there – just as he had in the Andes...."

पण ब्रिटिशांनी त्यांना कधीही परवानगी दिली नाही.  अँड्रिया वूल्फ लिहतात:
"... The first volume of the Political Essay on the Kingdom of New Spain had been published in English in 1811, and Humboldt’s fierce attack on Spanish colonialism had not gone unnoticed in London. What were they to think of a man who talked of the ‘cruelty of the Europeans’? It can’t have helped that Humboldt, in his constant effort to find correlations, had many times compared Spanish rule in Latin America with that of the British in India. The history of conquest in South America and India, Humboldt wrote in the Political Essay of New Spain, was an ‘unequal struggle’, or – again pointing at Britain – the South Americans and ‘Hindoos’, he accused, ‘have long groaned under a civil and military despotism’. Reading these remarks can’t have enamoured the directors of the East India Company to Humboldt’s travel plans...."

"... In London, Humboldt was introduced to botanists, explorers, artists and thinkers. He met Captain William Bligh (of the infamous mutiny on the Bounty), and Joseph Banks, Cook’s botanist on his first voyage around the world, and by now the president of the Royal Society, the most important scientific forum in Britain. Humboldt admired the beguiling paintings and sketches that William Hodges, the artist who had joined Cook’s second voyage, had brought back. Wherever Humboldt turned, new worlds were conjured up. Even in the early mornings, the first things he saw when he opened his eyes were the framed engravings of the East India Company ships that decorated the bedroom walls in his lodgings. Humboldt often wept when he saw these painful reminders of his unfulfilled dreams. ‘There is a drive in me,’ he wrote, ‘that often makes me feel as if I’m losing my mind.’..." 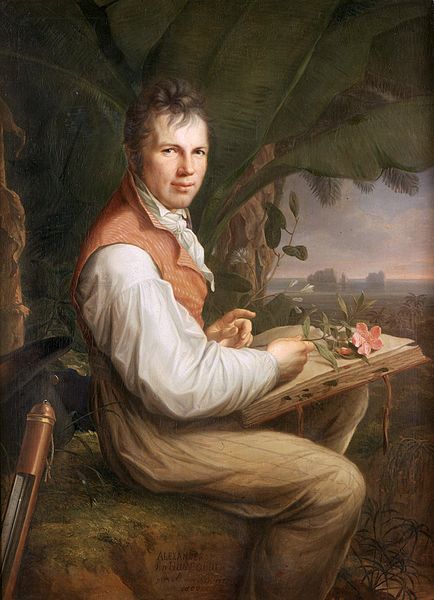 courtesy : Wikimedia Commons
Posted by Aniruddha G. Kulkarni at 9:00 AM No comments: