Bogart’s appeal was and remains completely adult — so adult that it’s hard to believe he was ever young. If men who take responsibility are hard to come by in films these days, it’s because they’re hard to come by, period, in an era when being a kid for life is the ultimate achievement, and “adult” as it pertains to film is just a euphemism for pornography.

My favourite character from the play is that of Kakaji (काकाजी).

Read the following set of dialogues from the play:

(Kakaji: Let it be friend. In jungle there are just two times. When hungry it's eating time and when tired sleeping one.

Acharya: I was thinking this house was behind the times by twenty-four years. But no, it's in prehistorical period. Looks like it has not heard any progress the primitive man has made since.

Kakakji: Wonder what is it? Progress or degeneration!)

Now this must be one of the most scathing attacks, in 20th century Marathi literature, on the concept of progress, by one of the most popular and main-stream artists and not by an 'outsider' like Bhau Padhye (भाऊ पाध्ये)

Kakaji seems to be praising the life of a hunter-gatherer.

"… Thus with the advent of agriculture and elite became better off, but most people became worse off. Instead of swallowing the progressivist party line that we chose agriculture because it was good for us, we must ask how we got trapped by it despite its pitfalls...

...Forced to choose between limiting population or trying to increase food production, we chose the latter and ended up with starvation, warfare, and tyranny.

Hunter-gatherers practiced the most successful and longest-lasting life style in human history. In contrast, we're still struggling with the mess into which agriculture has tumbled us, and it's unclear whether we can solve it...
"
("The Worst Mistake in the History of the Human Race," Discover Magazine, May 1987, pp. 64-66.)

And on Kakaji's question of progress or degeneration, John Gray says:

"...Today liberal humanism has the pervasive power that was once possessed by revealed religion. Humanists like to think they have a rational view of the world; but their core belief in progress is a superstition, further from the truth about the human animal than any of the world’s religions.

Outside of science, progress is simply a myth."

People asked Pu La if the character of Kakaji was based on the real life figure of Ramubhaiya Date (रामुभैया दाते).

Pu La answered them in 'Gangot' (गणगोत): "Kakaji in the play keeps saying 'I am still young' ('अभी तो मैं जवान हूँ') but here (in case of Mr. Date) the childhood (शैशव ) itself is not over yet."

Today I am enthralled by 'adult' appeal of Humphrey Bogart and Balraj Sahni, the guys who always took responsibility, often beyond our expectations. It's hard to believe if they were ever young.

Kakaji too takes responsibility. A lot of it. Staying unmarried himself, he raises the two kids of his brother after he and his wife pass away.

But unlike Bogarat and Sahani, Kakaji is young forever, perhaps a kid for life. A loveable hunter-gatherer. 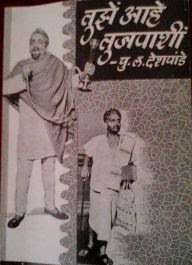 Kakaji on the left and Acharya on the right.
Posted by Aniruddha G. Kulkarni at 9:00 AM No comments: