"Mumbai returned quickly to a strange sense of normality on Thursday, less than 12 hours after triple blasts hit the city late Wednesday, leaving dozens dead and many more injured.

Heavy monsoonal rain overnight and all day Thursday posed the only practical impediment to residents.

“Children are going to school, people are going back to work … this is the resolute response that one expects from Mumbai.”

“Mumbai has always lived up to that high expectation,” the minister added.  "

Almost as much as India's independence in year 1947.

A scene from that: 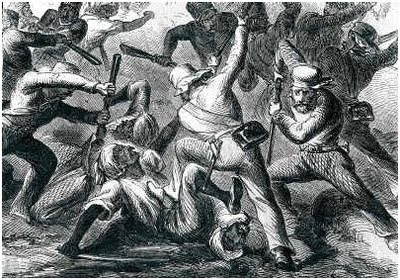 The British retaliated with horrific violence against the native population. (Charles Ball, `History of the Indian Mutiny', Vol. 1.)

"Therefore, when our statesmen (as our Prime Minister did, the other day, at Oxford) speak of the good things that happened under British rule, like the establishment of the Indian Civil Service, they should think sometimes of 1857, not only of the rebels but also of the ordinary citizens - men, women and children - who were shot or hacked to death or killed by various means, under the aegis of our great praiseworthy benefactors."

"While the death toll is often debated by historians with figures ranging between one hundred thousand and one million, it is usually agreed that several hundred thousands were killed (in Indian Rebellion of 1857)." (Wikipedia)

0.05% to 0.50% of estimated Indian population of 200 million died. It easily is the second most violent chapter in the history of modern India, next only to her partition. Far ahead of any of her wars or terrorist attacks on her.

How was Mumbai impacted by this in 19th century?

["When rebellion of year 1857 had caused tumult then trading and other activities in Mumbai were going on almost normally."
(Gangadhar Gadgil, 'Prarambh')]

Gadgil's book- part history, part fiction- on 19th century Mumbai is very good but not great. (To start with it lacks index.) The book is also a slap in the face of those people who say that Marathi speaking population of Mumbai has not contributed significantly towards making the city financial capital of India.

When I read it, I realise the kind of problems the ordinary people of Mumbai have faced since the city's founding.

And who were (and are) those people?

Mr. Shunkerseth, a devout Hindu, gave exemplary leardership to help quell it. As long as Mr. Shunkerseth was on the Governor'c Council, Muslims never asked for their own representative to be included in it.

Gandhiji and others would play such roles in 20th century.)

They have helped make the city what it is today, described aptly by inimitable poet Paththe Bapurao (पठ्ठे बापूराव):

"A rough estimate shows that diamonds worth Rs. 25 crore flew into the air at the time of the blast." 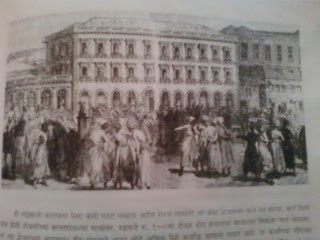 Bombay Stock Exchange c 1864
Posted by Aniruddha G. Kulkarni at 9:00 AM No comments: Links to this post