Anthony Lane, The New Yorker, Jan 17 2020:
"...Fellini is also the great divider. “La Dolce Vita” was the film most loved by Roger Ebert, for whom it was transformed with every viewing, whereas Pauline Kael likened Fellini’s efforts to “poking your head into a sack of fertilizer and then becoming indignant because you’re covered with excrement.” The director, she said, was “shocked and horrified” by the antics of the idle rich that he surveyed. If so, the shock has not survived; what lingers, after sixty years, is a lazy amusement at mortal foibles, which are scarcely confined to the wealthy. It is the poor who flock to a strip of wasteland where a couple of kids, for a giggle, claim to have beheld the Virgin Mary. Any hint of holiness is wrecked by a rainstorm, and by the glare of the arc lights under which TV cameras hope to catch the miracle, yet Fellini does not rage at our credulity. He smiles...."


“I think I achieved maturity at a pretty early stage. It has been my preoccupation to achieve as much density as possible within a superficially simple narrative structure. I don't think of the Western audiences when I make my films. I am thinking of my own audience in Bengal. I am trying to take them along with me, and this I have succeeded in doing. At the beginning, this audience was extremely unsophisticated. They were used to trash or the naive Bengali film. You had to take them along slowly. Sometimes you took a leap as in Kanchenjungha or in Days and Nights in the Forest, and lost them. These kinds of risks, especially in relation to their audiences, haven't been taken by Bergman or Fellini. Bergman is fairly simple, although he can be very austere and rigorous, and he is often aided by some marvelous photography. As for Fellini, he seems to be making the same film over and over again. There is a lot of bravura in his films, in spite of the fact that he's not so interested in the stories, and people go to see that bravura. I can't do all that Bergman and Fellini do. I don't have their audiences and I don't work in that kind of context. I have to contend with an audience that is used to dross. I have worked with an Indian audience for thirty years and, in that time, the general look of cinema hasn't changed. Certainly not in Bengal. You'll find directors there are so backward, so stupid, and so trashy that you'll find it difficult to believe that their works exist alongside my films. I am forced by circumstances to keep my stories on an innocuous level. What I can do, however, is to pack my films with meaning and psychological inflections and shades, and make a whole which will communicate a lot of things to many people.”

'Shallow people demand variety -- but I have been writing the same story throughout my life, every time trying to cut nearer the aching nerve."
Strindberg
(quoted by Marathi writer G. A. Kulkarni as epigraph  to his book 'Pinglavel', first published in 1977)

"...Federico Fellini was starting to be recognized outside of Italy, and Michelangelo Antonioni was gaining a significant constituency of his own.Antonioni was, in many ways, the anti-Fellini, cool and austere where Fellini was gregarious and cluttered, taciturn and intellectual where Fellini was garrulous and fantastical. The two respected each other and got along well professionally, but they were destined to run on parallel tracks, never intersecting and, at least in the eyes of the world, always competing with one another: an auteurist incarnation of the civil wars between Vespa and Lambretta, Coppi and Bartali, Loren and Lollobrigida....

...Fellini was also cagey about his relationships with his films, claiming that his creative impulse wasn’t one of joy but loathing, agony, struggle. “I make a film as if I were escaping,” he once said, “as if I had to avoid an illness. . . . when I am overcome by hatred, when I am full of bitterness.” And when it was over, he continued, his feelings about the finished work were rarely positive: “With each one of my films . . . our relationship is one of mutual dislike. I feel like a criminal. I want to leave no traces of what a film has cost me. I destroy everything.”...
Worse, still was his attitude toward the film business. “The movie business is macabre,” he would often say. “Grotesque. It is a combination of a football game and a brothel.”And worse yet, worst of all, were producers. Fellini would tell anyone who would listen to him—dinner guests, journalists, waiters, psychotherapists—about the wars he fought against producers over film subjects, casting, budgets, salaries, sets, props, music, editing, publicity: everything. He loved to share pointed anecdotes about producers and damning jokes, like this one about seeking financing for Le Notti di Cabiria: “The producer says, ‘We have to talk about this. You made pictures about homosexuals, you had a script about an insane asylum, and now you have prostitutes. Whatever will your next film be about?’ . . . I respond angrily, ‘My next film will be about producers!’...


(Anita) Ekberg was the very type of woman that Fellini was always drawn toward with an almost infantile eroticism: big-bosomed, blonde, glamorous, unattainable. She was, as he said, a creature from his imagination or from a movie screen, descended to Rome in mortal form: “healthy as a shark,” Fellini said of her, “emanating the heat of a summer day.” “Oh my God,” concurred Tullio Kezich, Fellini’s friend and biographer, who had permission to witness firsthand the gestation of the new movie, from the script stage through production and editing to the release, “her splendor was incredible, her outsized, totally exaggerated beauty!” To marshal a bona fide sex goddess into the film—with all the personal trappings and implications she bore—was, in many ways, the very point, as Kezich would later say, of what Fellini was doing: “The idea for the film is inseparable from the idea of Anita Ekberg.”
And yet, at some deeper level, the film was unimaginable without Marcello Mastroianni in the central role. Mastroianni had been a front-row spectator as his frequent costar Sophia Loren launched a Hollywood career right when the two were devloping a truly delicious on-screen rapport. The actor would recall his costar going home to study English every night after shooting, a habit that he, inveterate lazybones, took to be an enormous waste of time. “They wanted me to go, too,” he recalled. “But I couldn’t imagine for what. What was I supposed to do there, play a Hollywood cabdriver?” (He understood, too, that Loren was always going to be a bigger draw at the box office and, thus, earn more than he. “It’s only fair,” he told Time. “Bosoms are bosoms.”)..." 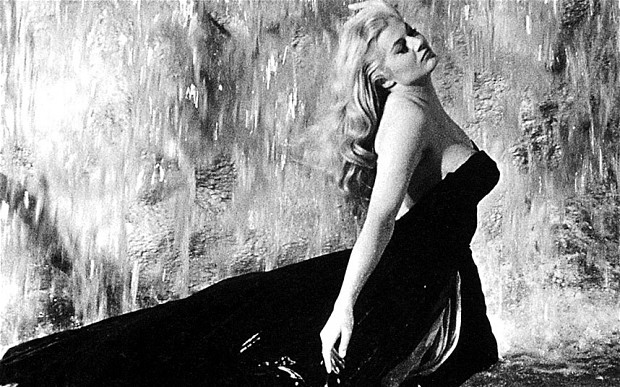 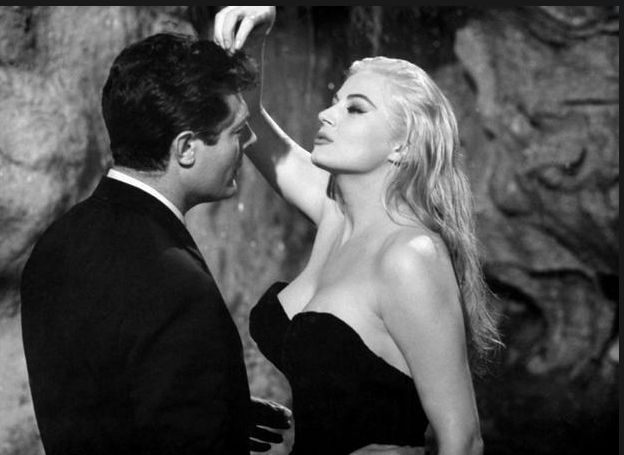 Credit: Astor Pictures Corporation
Posted by Aniruddha G. Kulkarni at 9:00 AM No comments: Links to this post