Does America Have Any Culture? And Urban Middle-class Maharashtra?

After reading what I have quoted below and watching Marathi TV occasionally I am motivated to ask: “Does Urban Middle-class Maharashtra Have Any culture?”

“…Since my arrival in Leipzig, I have continually been reminded about the way many Germans view American culture. They essentially feel it does not exist. One grad student only half jokingly told me that an entire semester of American cultural studies "should probably take about twenty-five minutes." But this, of course, is crazy. Now more than ever, I feel certain that the United States is as good at manufacturing culture as the rest of the world combined, probably because we often do so accidentally. A lack of culture is not our problem. The problem is we've become too effective at distributing that culture -- at the same time, in the same way, and with the same velocity. It all ends up feeling interchangeable, which makes it all marginally irrelevant. As it turns out, my initial question was beyond impossible. There are no interesting twentieth-century Americans. There can't be, because they all are…”

So not only has America tried to ruin the rest of the world with its wars, its financial meltdown and its stupid stupid food, it has allowed its own literary culture to implode. Jazz and patchwork quilts are still doing O.K., but books have descended into kitsch. I blame capitalism, Puritanism, philistinism, television and the computer.” (NYT Books Update June 2008) 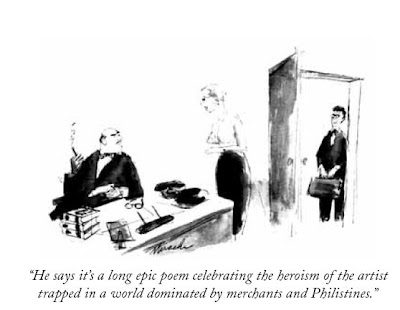 Artist: Joseph Mirachi The New Yorker December 11, 1954
Posted by Aniruddha G. Kulkarni at 10:00 AM No comments: