Douglas R. Hofstadter wrote an essay “Stuff and Nonsense” (December 1982), included in his book “Metamagical Themas: Questing for the Essence of Mind and Pattern”.

He concludes: “…The purpose of this column was to emphasize the very fine line that separates the meaningful from the meaningless. It is a boundary line that has a great deal to do with the nature of human intelligence, because the question of how meaning emerges out of meaningless constituents when combined in certain patterned ways is still a perplexing one….”.

English language has produced plenty of delightful nonsense, in the form of verses, poems etc. One example:

Indian languages too have produced plenty of nonsense.

In January 2007, Penguin published- “The Tenth Rasa: An Anthology of Indian Nonsense Edited By Michael Heyman with Sumanyu Satpathy and Anushka Ravishankar”

In Marathi, Vinda Karandikar विंदा करंदीकर has written quite a bit of 'nonsense'.

Hindi films have plenty of nonsense. Playback singer and actor Kishore Kumar किशोर कुमार was the greatest practitioner of it.

Now, you and I may never understand, in following picture, what the lady means by "grrzlackity….bonk" but the motor mechanic surely does! 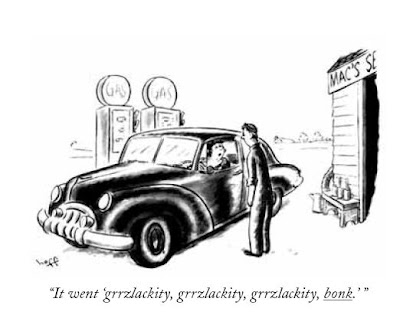