V D Savarkar: "I have no quarrel with Mr Jinnah's two-nation theory. We Hindus are a nation by ourselves and it is a historical fact that Hindus and Muslims are two nations."

I really liked it. In the past, the book had moved the likes of Bhagat Singh and Subhas Chandra Bose.

I am trying to re-read parts of it. I am not liking it.

The best part of the book is wonderful line drawings made by D G Godse (द ग गोडसे). They probably were not there in the edition I had read earlier. Godse made them for the book's 1947 edition that was published by Phoenix publication, Mumbai.

Here are two of the drawings: 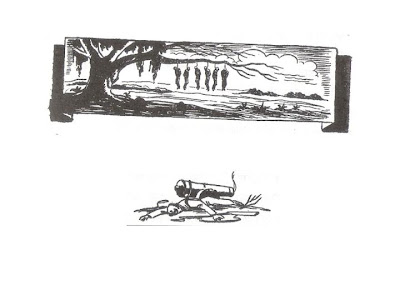 They just sum up what in the end 1857 was: Hangings and shootings.

D G Godse, as I knew him, was a die-hard liberal, a great proponent of composite culture of India. All of his literary work reflect that. The two-nation theory would be Godse's worst nightmare.

Then, why did he draw for Savarkar's book?

One possible reason: Savarkar's rabid anti-Muslim views were formed much time after, post-Andaman, he wrote this book. Maybe this was Godse's way of appreciating a part of Savarkar. The same part Bhagat Singh and Subhas Chandra Bose had highly appreciated earlier.

[Most intellectuals of Maharashtra have struggled with the dilemmas Savarkar poses. Even great historian Y D Phadke (य. दि. फडके) couldn't escape them.]

Second possible reason: Godse could work with authors he did not really like. For instance, there was no love lost between Vishram Bedekar (विश्राम बेडेकर) and him but he created the beautiful cover of Bedekar's award winning book: 'एक झाड आणि दोन पक्षी', १९८६ (Ek Zad Ani Don Pakshi, 1986). BTW- For me, the cover is better than the rest of the book!

"...There was savagery on all sides in 1857, while at home Lord Palmerston wanted to see Delhi deleted from the map in reprisal for what had happened there. Atrocities against the British were also committed at Kanpur, where women and children were butchered without mercy, too, which guaranteed the appalling retribution that followed when the rebellion was put down.John Nicholson, who became a cult figure among his native troops (they thought he was an incarnation of Vishnu) and his fellow countrymen, proposed "a bill for the flaying alive, impalement or burning of the murderers of the [British] women and children of Delhi"; and one of his soldiers (a Quaker, no less) habitually bayonetted sepoys while chanting Psalm 116. That's the one that begins "I am well pleased: that the Lord hath heard the voice of my prayer"..."

"Indian scholars are not the only falsifiers of events. British historians indulged in it with equal zeal. Take, for instance, the Revolt of 1857. While the British call it the Sepoy Mutiny, Indians describe it as the First War of Independence. In fact, it was more than a mutiny of some sepoys of the forces of the East India Company. And it was by no means a war of independence waged by oppressed Indians.

A vast majority of Indians were opposed to it and large numbers of Indians helped to suppress it. Its Muslim supporters wanted to restore Mughal rule and bullied a reluctant Bahadur Shah Zafar to become their leader. Even the poet, Asadullah Khan Ghalib, kept a respectable distance from them. Hindus who rose in rebellion were led by their erstwhile rulers who had been ousted by the British. The credit for making 1857 the year of India’s First War of Independence goes largely to the pseudo-historian, Jawaharlal Nehru..."

Mr. Singh is wrong. It was not Nehru. It was Vinayak Damodar Savarkar who made 1857 the year of India’s First War of Independence.
Posted by Aniruddha G. Kulkarni at 9:00 AM No comments: Links to this post