Mr. Aamir Khan, We ALL are a bunch of Johnny-come-latelies

Kundan Shah when asked by Hindustan Times if a script like 'Jaane Bhi Do Yaaro' would find a financier: "...Maybe if a star backs a project, it may be possible but my experience is that all of them without exception are highly illiterate." (February 7 2010)

Naseeruddin Shah: "I've lost the hope of seeing a truly great film being made in this country, at least in my lifetime." (March 20, 2010)

They say "3 idiots" is the biggest hit in the history of Hindi films. Maybe it is.

In December 2009, in temple town of Mahabalipuram, a tour guide took Mr. Khan by surprise when he admitted to never even having heard of the actor.

I have always found Mr. Khan, a narcissist, an average actor who happens to be very successful.

He never mentions luck while talking about his success.

It's always his hard work, his body, his scalp, his dedication, his patriotism, his intelligence, his creativity, his wife, his family, his vision...

See the episode at Mahabalipuram here.

I was quite amused by it and thought it was very ironic.

Mahabalipuram, that appears on this blog here, dwarfs every one. Occasionally even the neighbouring Bay of Bengal!

Reviewing "The Earth After Us : What legacy will humans leave in the rocks?" by Jan Zalasiewicz, Robin McKie says:

“… the planet's constantly shifting geology will, inevitably, crush and bury every one of our greatest creations, our skyscrapers, motorways, bridges, churches and temples. Tectonic trashing, then, is to be the fate of most of humanity's handiwork.

Not all will be lost, however. Odd clues will emerge when seismic activity will push up a slice of petrified city. "Here there will be metres-thick layers of rubble, of outlines of tunnels and pipes, of giant middens of rubble and waste." That, then, will be our legacy. It is not much of a memorial. Indeed, by contrast, Ozymandias did well with a couple of headless trunks of stone.”

“…we still dig up plenty of 100-million-year-old dinosaur bones today. However, those ancient animals thrived for tens of millions of years. By contrast, Homo sapiens has lasted around 100,000. By that reckoning, we are a bunch of Johnny-come-latelies.” (The Observer, Sunday 27 September 2009)

Sadly even Mahabalipuram may do only as well as Ozymandias.

('Ozymandias', 1818 is an example of how a great work of art persists.

In last few years, I have seen it being quoted by scientists like Jared Diamond in 'Collapse: How Societies Choose to Fail or Succeed', 2005 and Richard Dawkins in 'The Ancestor's Tale', 2004.) 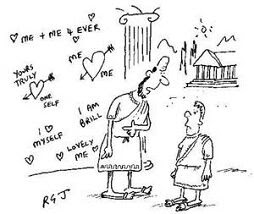 ‘Own up, Narcissus, you’re responsible for this graffiti, aren’t you?’
Artist: Richard Jolley (rgj), Spectator
Posted by Aniruddha G. Kulkarni at 9:00 AM No comments: Links to this post