Pune Roads, What a Silly Place to Walk?

I have been to many cities of India and the world but I have never met people as rude as motorists in Pune.

When I first went to Mumbai and attempted crossing the road at Opera House, I was overwhelmed but not scared. Cars were helping me cross and not trying to crush me to asphaltic death.

At Pune even on small roads, I feel scared as drivers seem to be rushing towards me. They follow me if I run. They seem to enjoy my panic. They make me sick.

Few years ago an old woman grabbed my hand at Deccan Gymkhana to ask my help to cross the road.

I see no hope for Pune’s old and poor unless some drastic measure are undertaken. Today the only way to beat Pune motorist is to become one!

TOI’s Gitesh Shelke reports :
“…These three accidents are not isolated cases as the city continues to register an increasing number of accidents involving senior citizens, ranging from minor injuries to fatal.

Statistics available with the city traffic police revealed that in the year 2005 as many as 24 senior citizens were killed, 19 were seriously injured and 61 sustained minor injuries in various accidents. The number of fatal accidents increased to 32 in 2006. This year so far 18 serious accidents has been registered while 61 minor accidents were reported.

This year, as many as 14 senior citizens were killed on the road, 12 sustained serious injuries while 46 sustained minor injuries in various road accidents by the end of June.

Suresh Bhoomkar, assistant commissioner of police (ACP, traffic), said that fatalities involving senior citizens usually take place while either crossing the roads or driving two/four-wheelers or while travelling in public or private vehicles.

However, records showed that majority of the citizens have been killed while crossing or walking on the roads. Sangramsinh Nishandar, ACP, traffic, pointed out that motorists, especially two-wheeler riders were insensitive towards the elderly…”

When Pune motorists watch a pedestrian crossing, they say “What a Silly Place to Walk”. 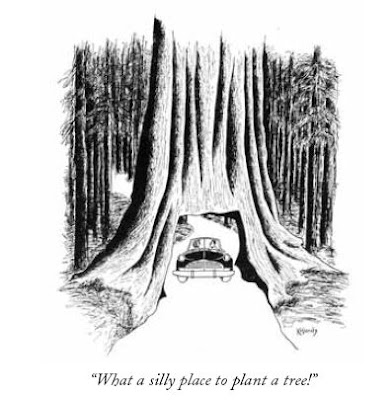 Artist: Anatol Kovarsky The New Yorker 10 May 1947
Posted by Aniruddha G. Kulkarni at 11:57 AM No comments: Links to this post

Females are always cheaper. Even on Durgashtami.

Times of India’s Kounteya Sinha reported on October 12, 2007:
“…Over 40% of women in a nationwide survey reported being beaten by their husbands at some point of time. More shockingly, around 54% of the women surveyed thought that such violence was justified on one ground or the other.

According to India’s most comprehensive National Family Health Survey-III, which interviewed 1.25 lakh women in 28 states and the national capital during 2005-06, 41% of women justified wife beating if it was because they showed disrespect towards their in-laws while 35% women were OK with being brutally assaulted by their husbands if they neglected household chores or their children.

Not surprisingly then, 51% of the 75,000 men interviewed didn’t find anything wrong with assaulting their wives. “

Older the civilization, more the hypocrisy? I feel so as we celebrate Durgashtami today. 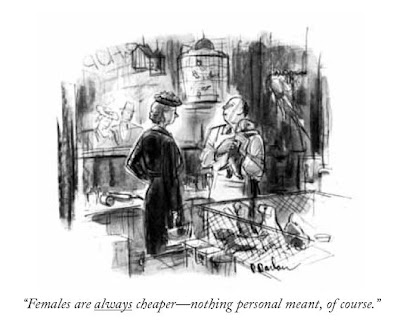 Artist: Perry Barlow The New Yorker 5 June 1948
Posted by Aniruddha G. Kulkarni at 10:57 AM No comments: Links to this post