Godse Bhataji's Day-Night Game of Cricket at Jhansi in 1858!

Wikipedia informs: "The British brought cricket to India in the early 1700s, with the first cricket match being played in 1721. In 1848, the Parsi community in Bombay formed the Oriental Cricket Club, the first cricket club to be established by Indians. After slow beginnings, the Europeans eventually invited the Parsis to play a match in 1877..."

It remains one of the best Marathi books that have been published in last one twenty-five years.

In March 1858, Godse was in Jhansi. There he saw first hand the battle between the forces of British and Rani Lakshmibai, ruler of Jhansi.

I wonder if anyone knows if and when Godse saw a game of cricket. Or indeed participated in one. Or did he just hear about it? Was the colour of the ball red in those days?

He refers to cricket as 'chenduphalii' (चेंडुफळी) in following passage that describes exchange of shells on the third day of the battle.

("...during the day because of Sun's brightness shells couldn't be seen. Many people used to suffer because of that. In the night, they looked distinctly, like in a game of cricket, red...")

Appealing against the bad light or against the unfairness of the British Raj was as hopeless as in the picture below. 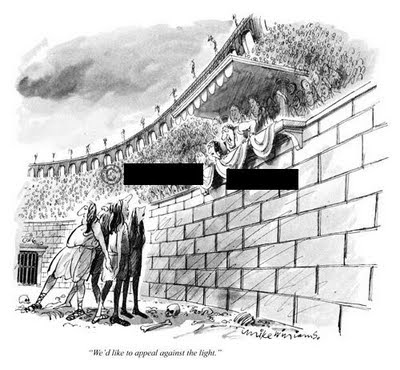 Caption reads: 'We'd like to appeal against the light.'

Please visit http://www.punchcartoons.com for more fun.
Posted by Aniruddha G. Kulkarni at 9:00 AM No comments: Links to this post