So said Bill Perkins, one of the founding traders of Centaurus Energy Advisers, a hedge fund of about two dozen market makers – many formerly of Enron – that has reaped billions by betting on record-breaking prices in gas and oil. ( FT, May 14, 2008)

Thank you, Mr. Perkins for reminding me.

Just the day before I read this:

Ingmar Bergman: “…it is my opinion that art lost its basic creative drive the moment it was separated from worship. It severed an umbilical cord and now lives its own sterile life, generating and degenerating itself. In former days the artist remained unknown and his work was to the glory of God. He lived and died without being more or less important than other artisans; 'eternal values,' 'immortality' and 'masterpiece' were terms not applicable in his case. The ability to create was a gift. In such a world flourished invulnerable assurance and natural humility. Today the individual has become the highest form and the greatest bane of artistic creation.” 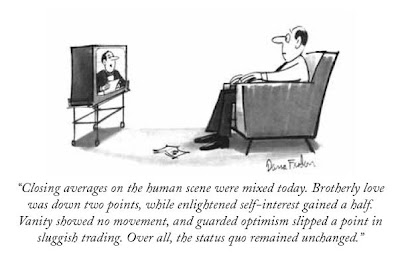 Artist: Dana Fradon The New Yorker 19 January 1976
Posted by Aniruddha G. Kulkarni at 10:00 AM No comments: