Real Atom Bomb Tastes in the Mouth Like a Chinese Toy!

Paul Tibbets, who dropped the atomic bomb on Hiroshima died this month. BOB GREENE has written his obit. (NYT November 12, 2007).

“…In the sky above Japan that August day, he polled his crew: “Do we all agree that this is Hiroshima?” Afterward, he noted that he could taste the bomb in his mouth. “It tasted like lead.”…”.

Thanks to controversy in USA over Chinese toys, lead has been a lot in the news this year.

NATALIE ANGIER has written beautifully on the subject of lead (NYT August 21, 2007).

“The human body needs a diet enriched with many ingredients from the periodic table that sound less like food than like machine parts or spare change. We must have iron to capture oxygen, copper and chromium to absorb energy, cobalt to sheathe our nerves and zinc to help finger our genes. Other creatures demand the occasional sprinkling of tin, nickel, platinum, tungsten and even strontium.

But when it comes to lead, the 82nd item on Mendeleev’s menu of the elements, the universal minimum daily requirement is zero. As far as we know, neither we nor any known life form needs the slightest amount of lead to survive. And for humans, especially infants and young children, consumption of even moderate amounts of the metal can have serious consequences.

Developing brains seem to be extremely sensitive to the effects of the metal, which is why many scientists who study lead were distraught by the latest news of lead paint’s being used on children’s toys…

Lead was a civilizing metal, there were so many things it could do…”

Was atom bomb too a civilising bomb for Americans?! 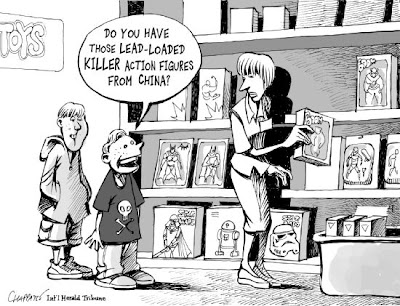 Scientific American reports in November, 2007 issue: “A headless roach may not be the smartest of its kind, but it can certainly survive.”

Swaminathan S Anklesaria Aiyar wrote in his column for Times of India May 27, 2007:

“…most of the government sector is third-class and tarnished…… Actually, government spending is gargantuan: a million crores per year. But it has so much waste and corruption that voters refuse to show gratitude for the little that gets through…

The police no longer catch criminals and the courts no longer convict them. Conviction rates have fallen to 16%… Bureaucrats are typically callous and corrupt…

Around 35% of all electricity is stolen, causing power crises…

it takes Rs 3.65 of government spending to get one rupee of Public Distribution System benefit to the poor. What a waste! …

The problem is a decaying government sector that neither Congress nor other parties are willing to reform.”

Members of Indian middle-class are in the habit of blaming all the ills country faces on politicians. Instead they should target senior civil servants.

They don’t because they are their cousins, parents and children. 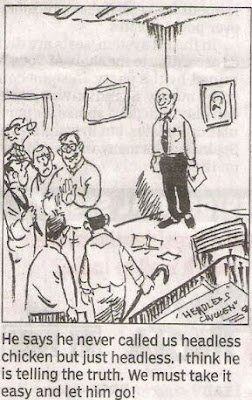