Graham Moore, The New York Times, January 2017:
"...Not even Conan Doyle could have imagined just how long his creation would outlive him. Since Conan Doyle’s own death, Holmes has been depicted in dozens of feature films, television series, stage plays, comics, radio dramas and video games. The pastiche novels — that is, Holmes stories not composed by his creator — are even more numerous. Holmes is arguably the most famous fictional character of the past two centuries, rivaled only by Dracula and James Bond, with perhaps, as the decades wear on, Batman and Harry Potter nipping at their heels..."


“...I have always been a prudish man, even in my thoughts.


I wasn’t discontented with my way of life. I had chosen it. I had patiently realized an ideal which, until the previous day—I repeat this in all sincerity—had satisfied me completely.


Now I was there, in the dark, with the song of the train, red and green lights passing by, telegraph wires, other bodies stretched out in the straw, and close beside me, within reach of my hand, what the Abbé Dubois called the carnal act was taking place.


Against my own body, a woman’s body pressed itself, tense, vibrant, and a hand moved to pull up the black dress, to push the panties down to the feet which kicked them off with an odd jerking movement.


We still hadn’t kissed each other. It was Anna who drew me toward her, on top of her, both of us as silent as snakes.


Julie’s breathing grew quicker and louder just as Anna was helping me to enter her, and I suddenly found myself there.


I didn’t cry out. But I came close to doing so. I came close to talking incoherently, saying thank you, telling of my happiness, or else complaining, for that happiness hurt me. Hurt me with the attempt to reach the unattainable.


I should have liked to express all at once my affection for this woman whom I hadn’t known the day before, but who was a human being, who in my eyes was becoming the human being...” 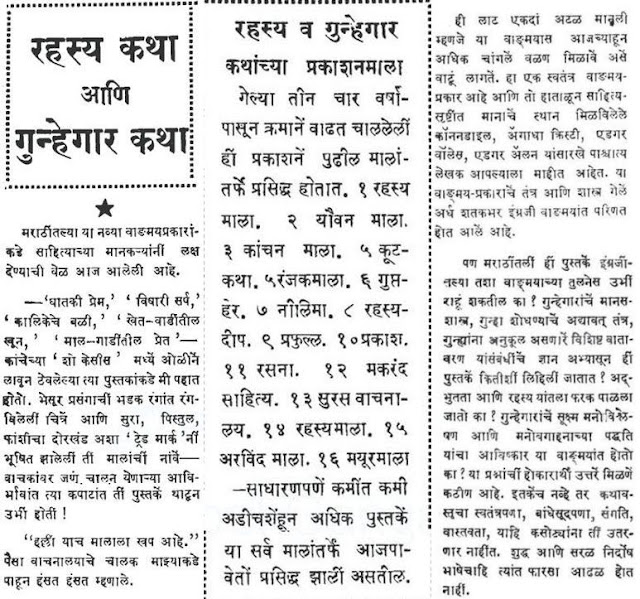 
First one was a book review by Graham Moore of “ARTHUR AND SHERLOCK : Conan Doyle and the Creation of Holmes” by  Michael Sims and the second was an article in Marathi newspaper Loksatta (लोकसत्ता) by Mahesh Elkunchwar (महेश एलकुंचवार) on Marathi crime fiction writer:  Mr. Arnalkar.

I first read Sherlock Holmes, in Marathi, in early 1970's. Most of them I had borrowed it from a small book lending library. During the same period, out of curiosity, I also read Arnalkar's novels. Although I did finish reading a few of Arnalkar's novels, I never fell in love with them unlike the books- most in Marathi- of  Doyle, Erle Stanley Gardner, James Hadley Chase, Alistair MacLean, Narayan Dharap (नारायण धारप), Gurunath Naik (गुरुनाथ नाईक), Shrikant Sinkar (श्रीकांत सिनकर), Indrajal Comics featuring Phantom, Mandrake and Flash Gordon.

As the late Mr. Sarang opines above, I often felt as an adolescent that Mr. Arnalkar was translating from English word for word.  My son, 23, once an avid reader of books, was/is unlikely to even touch his books. Moreover the kids these days get to read Sherlock of Doyle as well as Sherlock that has been made new. On top of that we have to reckon with the decline of conventional books (अक्षर वाङ्मय) in the pecking order. For an urban middle-class young person today, video games, mobile telephony and TV serials come much higher. Elkunchwar himself admits: "...आज पुन्हा अर्नाळकर मी वाचतो तेव्हा कंटाळा येतो;..."

Sure,  as Elkunchwar describes, Arnalkar's novels probably had some good qualities such as the simplicity and the smooth flow of the language, seamless creation of new words, naming of the characters, description of Mumbai but his books never had any quality like. for instance, that of, say, Georges Simenon.

John Gray writes about Simenon:
"...Some of the best examples of what is commonly described as crime fiction – the novels of Patricia Highsmith, for instance – are studies in character which show why the protagonists act as they do by probing their states of mind. In Simenon, human beings are the sum of their impulses and behaviours; there is no enduring self behind the façade of habit. No one authors their own life; the belief that they are responsible for their actions is an illusion...

...André Gide was not exaggerating when he described Simenon as one of the greatest 20th-century writers of fiction. (Other admirers include T S Eliot, Henry Miller, William Faulkner and John Banville.) By the time he died in 1989, he was one of the most widely published writers in history, with world sales of over 500 million books and many film adaptations to his credit..."

Arnalkar did not seem to even try what Bhau Padhye (भाऊ पाध्ये) later achieved in his Mumbai based novels: Capturing alienation, desperation, all conquering commerce, impossibility of finding an affordable dwelling, ubiquitous Hindi cinema...something Saadat Hasan Manto (1921-1955) had also achieved in a few of his Mumbai based stories.

We also have to take into consideration the imported inspiration that was available to Mr. Arnalkar: Noir films and glorious tradition of pulp magazines. (I have always felt that the golden age of Hindi cinema 1949-1965 freely borrowed from noir films and Jazz music.) 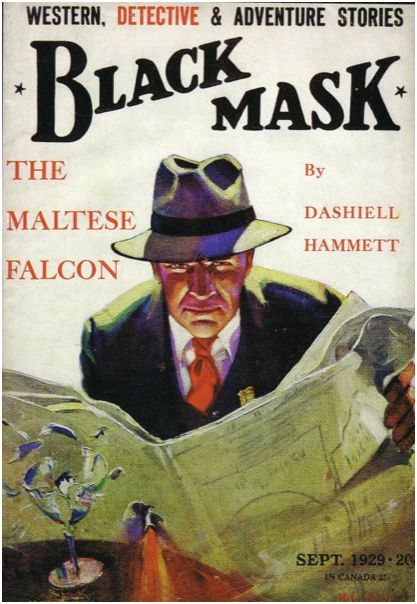 “...Dashiell Hammett  found a home for a lot of his fiction in Black Mask, one of America’s great bygone pulp magazines. Raymond Chandler, Carroll John Daly, and other masters of detective fiction all placed their work in Black Mask, which first published Hammett in 1922, and which serialized The Maltese Falcon in 1929... in 1930, when Black Mask had a circulation of 130,000...” 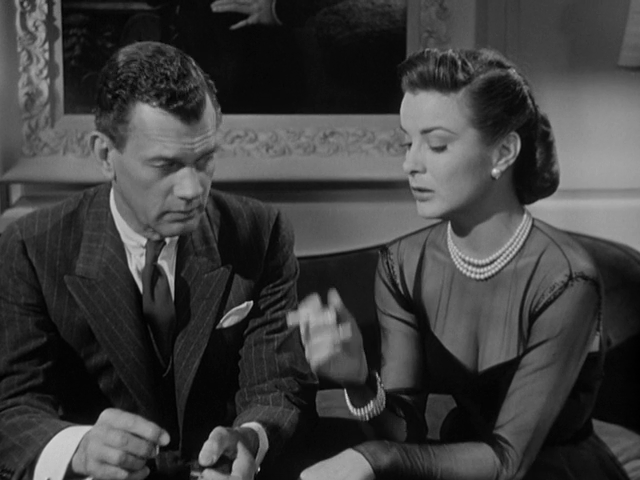 Joseph Cotten and Jean Peters in Andew L. Stone's  'A Blueprint for Murder', 1953

Even crime fiction written in Marathi is of the same average (to mediocre) quality as most of the fictional writing done in it in 20th century. Mr. Arnalkar, who was a better writer than most of the contemporary Marathi novelists,  entertained millions of Marathi readers and we all should be grateful to him for that.