Can Anna Hazare be compared to Mahatma Gandhi? How clean a smell he manages to leave behind!

A favourite repost of Anna Hazare's detractors is - He is no Gandhi. (Someone writes he is not a patch on Jayaprakash Narayan.)

Maybe he is not. But are they so sure?

I have now read most of Joseph Lelyveld's 'Great Soul: Mahatma Gandhi and His Struggle with India', 2011.

And the overwhelming feeling I constantly got while reading the book: how human Gandhi was. Hardly a saint for sure if I compare him to the saints I know Kabir, Dnyaneshwar, Tukaram, Namdev...He was a politician and social activist.

Was Gandhi successful in what he set out to achieve in personal and public life?

Mahatma Gandhi: "India has still to attain social, moral and economic independence in terms of its 700,000 villages as distinguished from its cities."

Lelyveld: "...India has now been free and independent for about four months. And the leading shaper of that independence unsettled and despairing...No single catastrophe served as catalyst for his decision to start seventeenth and final fast on January 13 (1948). In the days running up to the fast, he'd been forcefully struck by several indications that matters were on a downward slide. First he received a detailed account of rampant corruption at all levels of the newly empowered Congress movement in the Andhra region of southeastern India...Announcing the fast at his prayer meeting on January 12, the Mahatma mentioned the insecurity of Muslim and the Congress's corruption..." (page 337-338)

Andrew Roberts: "...of the four great campaigns of Gandhi's life—for Hindu-Muslim unity, against importing British textiles, for ending Untouchability and for getting the British off the subcontinent—only the last succeeded, and that simply because the near-bankrupt British led by the anti-imperialist Clement Attlee desperately wanted to leave India anyhow after a debilitating world war."

Why do I then like a billion others still admire Gandhi? Why do I hang my head in shame that his killer was a Maharashtrian Brahmin like me?

“One may feel, as I do, a sort of aesthetic distaste for Gandhi, one may reject the claims of sainthood made on his behalf (he never made any such claim himself, by the way), one may also reject sainthood as an ideal and therefore feel that Gandhi's basic aims were anti-human and reactionary: but regarded simply as a politician, and compared with the other leading political figures of our time, how clean a smell he has managed to leave behind! “

(This essay of George Orwell, Peter Davison speculates, could have been influenced by Balraj Sahni who worked with Gandhiji in 1938 and with Orwell at the BBC. Orwell brought Mr. Sahni and his future wife, Damyanti, together.

Anna Hazare too is a politician and social activist and so far he has managed to leave behind only clean smell! 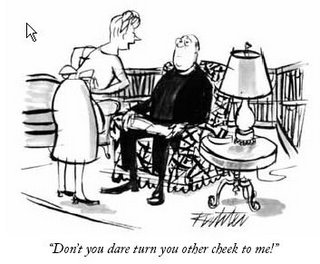 Artist: Mischa Richter, The New Yorker, Apr 23 1960
Posted by Aniruddha G. Kulkarni at 9:00 AM No comments: Links to this post