Vasant Sarwate वसंत सरवटे has drawn some penetrating pictures of crowds of Mumbai. Here is one of my favourite- Marching through public urinal.

But as C P SURENDRAN says in Times of India September 5 2007 "Mobs on the rampage", crowds have started degenerating into mobs with the slightest of provocation.

“…If justice and punishment are a matter for a throng of people to dispense with, why have courts of law?

Other instances abound of mob assuming for itself a kind of vigilantism that is hard to distinguish from full-fledged riot. Just about anything could spark it. A desecrated statue, a professor who passed a lewd remark on a student, a movie with lesbian innuendoes, a scholar who said the king was naked, a novelist who laughed at a god - just about anything, including two displaced leopards, trapped and beaten to death in Nashik by the mob recently. Anything is reason for the crowd to morph itself into the killer mode of the mob. Any object, painting, truck, or wildcat could be the wand that waved a mob out of men merely staring into the middle distance and sipping tea.

The sad fact is that the mob is so much a part of the so-called Emerging India. It is people who have lost trust in the due process of law, whose sense of retribution brooks no delay in gratification. Mob is a people in a hurry to avenge. And there are so many of them. Add to it poor policing. Every thousand Indians need to make do with just one policeman. Compare that with the UN recommendation of one policeman to 400 people.

An equally contributory cause is the high level of frustration that a vengefully consumerist society - India, for instance, is one of the fastest growing car markets in the world - will transmit to the voyeuristic have-nots. The increasing incidence of mob fury is more a warning than an indication that there are a lot of unhappy people looking for an excuse to get angry as hell.

As pockets of plutocrats increase, we are likely to see more and more of the mob, representing the Indians left out from the movement forward, taking to the road and travelling backward to the stone age of intolerance and violence, a twilight land where a botched attempt at snatching a chain could be seen as an act of arch villainy and mindless violence as its inexplicable but just comeuppance…….”

Dr. Shreeram Lagoo डाँ. श्रीराम लागू (who makes first appearance on this blog earlier) once said how disturbed he felt when mobs attacked the Bhandarkar Oriental Research Institute (BORI) at Pune in January 2004. It reminded him of arson in many parts of Maharashtra, targeting Brahmins, after assassination of Mahatma Gandhi in 1948.

Writer Pratibha Ranade (famous for her first-hand account of Afghanistan and books on life and work of Rani Laxmibai & Durga Bhagwat) has given a chilling account of that period, describing what happened to her middle-class Brahmin family in Kolhapur when their cosy neighbourhood morphed into a mob. 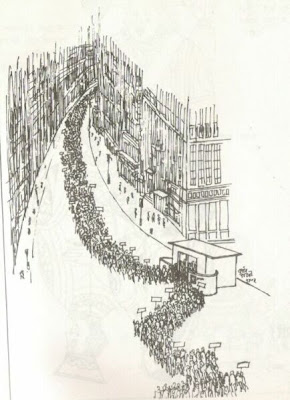