From October 14, 2007 onwards, Manohari Singh, number one Saxophonist in the world of Hindi film music, has been speaking to Vividh Bharati on his art.

I remember vividly posters of Dev Anand’s Guide displayed all over Miraj circa 1965. It was exhibited at Deval talkies. I wanted to watch the film. My father flatly refused. Quite rightly so because Guide has nothing to offer to a five/six year old boy!

But why did I want to watch it? Its songs, particularly “Gata Rahe Mera Dil”. Manohari Singh has famously played sax in it.I guess I started liking Jazz instruments because of artists like Singh

Led by C Ramchandra and R D Burman, some great Jazz-inspired music has been created in Hindi film industry.

This was not unprecedented. Great Tyagaraja composed a raga after listening to western band at the Thanjavur Maratha court of 18th Century. (Source- RGK of Times of India)

In December 2002, I wrote on Amazon.com about the experience:
“I bought this album in Mumbai, India way back in 1984. I had then not heard much about Coltrane. I was and still not into any form of western music. But I like Indian classical Music. And Coltrane moved me beyond my wildest imagination. Even today when I hear "I'm old fashioned", tears come to my eyes. For me,he is Pandit Coltrane!”

The Economist (Sep 8 2006) said:” Ask any fan or critic to nominate the most influential jazz figures of the past 50 years and two names will invariably come up: John Coltrane, saxophonist extraordinary, and Miles Davis, trumpeter…

Coltrane was a man on a mission. During his time with Davis, he confronted and defeated his addictive demons, a victory he attributed to “a spiritual awakening” that prompted a lifelong commitment “to play music that would make people happy”. Not just make them happy, in fact, but elevate them to another plane. For Coltrane, music became more than mere entertainment. It was also the means by which he pursued an ecstatic personal quest, every time he played.

His spiritual hunger was matched by exhaustive practice. He sometimes literally fell asleep with his horn in his hands, and his knowledge of harmony, scales and modes was encyclopedic.”

Snake charmer below is supposed to be using PUNGI for the job. Pungi is nothing but a double clarinet with the difference being the mouthpieces of the Indian instrument is concealed in a large gourd. 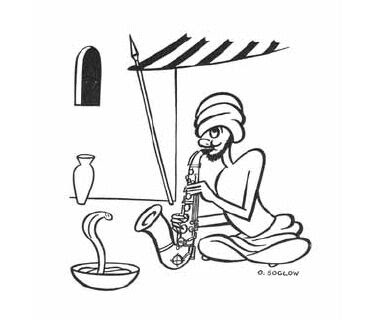 Artist: Otto Soglow The New Yorker 28 Oct 1939
Posted by Aniruddha G. Kulkarni at 12:21 PM No comments: Links to this post