Raghunath Dhondo Karve (1882-1953) remains one of the most fascinating characters of 20th century India.

Dhond’s book consists of collection of his literary essays. Three of them are focused on RDK. Third of them is the best-“Ra Dho Karve Ani Santati Niyaman” (R D Karve and family planning).

In the said essay, Dhond analyses why RDK was not as successful in his mission as Margaret Sanger and Marie Stopes, his counterparts in US and UK respectively.

Sample few of RDK’s thoughts: - 1) so long childbirth and venereal diseases are prevented debauchery of women does not really harm men and the benefit is those women who need variety get it. 2) Why cannot women have right to prostitution?

Dhond claims contemporary society’s objectives were restricted to those of Sanger and Stopes and hence not only RDK’s mission has a whole suffered, he himself was persecuted by society at large. There were other reasons too - RDK’s unattractive personality, poor finances and lack of networking skills.

It’s unfortunate RDK was not alive when three major events that make us understand woman sexuality better happened- 1. The Kinsey report of 1953 2. Masters and Johnson’s book of 1966 and 3.The Hite report of 1976. The late Stephen Jay Gould has discussed them in some detail in his essay “Male Nipples and Clitoral Ripples” (“Adam’s Navel” Penguin 1995).

RDK would have been particularly pleased because these reports busted Freud’s edict that women must make the transition from clitoral to vaginal orgasm to escape the tag of frigidity. (by the way RDK also hated Freud’s child -psychoanalysis.). Therefore, if women were as much entitled to sensual pleasure as men they need not choose vaginal orgasm and hence men.

RDK would also have been happy with the oral contraception’s (birth control pill’s) contribution to women's reproductive rights and health,

I am not sure if our society is ready even today to discuss RDK’s mission in its entirety.

Was there a Mrs. RDK? Sure there was. Malati was whole-heartedly with Raghunath on this treacherous journey. She actively participated in whatever he undertook. She willingly supported his decision not to have any children. She also helped him in making contraceptives and applying them on to their women clients. By all known accounts they were a happy couple. 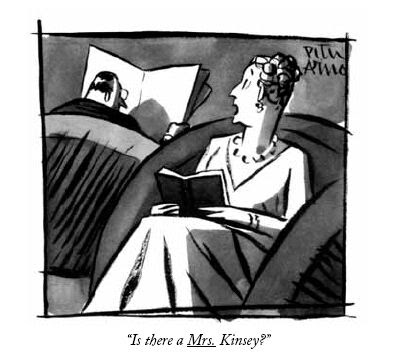 Artist: Peter Arno The New Yorker 1 May 1948
Posted by Aniruddha G. Kulkarni at 7:25 PM No comments: Links to this post