There is a huge controversy in Maharashtra, including its legislative assembly, over a banner where Union minister Sharad Pawar’s picture is printed above that of medieval King Shivaji.

This might have hurt sentiments of many but I thought the real debate should be how Sharad Pawar and his party have badly let down the ideals of Shivaji, arguably the greatest ruler of Indian origin.

“…But I think the really important trends in journalism in the last 25 years are basically the dumbing down of media what I called in a cover piece for The New Republic in 1990 the triumph of idiot culture, manufactured controversy, sensationalism, shouting from the left and the right as if this were real news and real information.

“…Thanks perhaps to my lucky stars, it has been my privilege to cover India’s apex legislature — for long years on a daily basis — since the first meeting of the "provisional Parliament" in February 1950. Until then the Constituent Assembly used to double up as the Central Legislative Assembly, too. The first Lok Sabha, elected in 1952, quickly attained such high standards of debate and decorum as to win the nation’s deep respect and wide international acclaim…

… Meanwhile, with lungpower having taken precedence over brainpower and raucous shouting replacing reasoned debate, wilful and repeated disruption of parliamentary proceedings inevitably followed. Sadly, the ruling Congress Party, with its massive majority achieved in 1971, became a partner in this disgraceful downhill slide…” 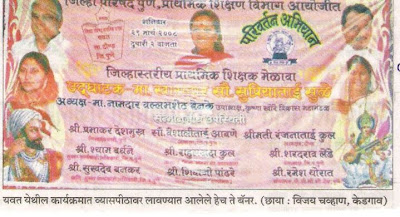 Picture Courtesy: Pudhari April 3 2008
Posted by Aniruddha G. Kulkarni at 9:00 AM No comments: