Then Missing WMD, Now Books? Mike Luckovich Is Back and How!

"...The Great War, wrote (Karl) Kraus, "was a disastrous failure of the imagination and an almost deliberate refusal to envisage the inevitable consequences of words and acts". It was "made possible above all by the corruption of language in politics and by some of the major newspapers". Burke's book shows that this is as true of 21st-century multi-theatre conflict, from the bloodthirsty rants of Osama bin Laden and Anwar al-Awlaki through the falsehoods about Iraq's WMDs in prestigious western newspapers, the martial bluster of respectable politicians and intellectuals to, most recently, the "manifesto" of the Norwegian mass murderer Anders Behring Breivik..."

This blog loves Mike Luckovich. Some of his absolute gems have been captured here.

For instance Changing of Guard  or What's Map (both dated November 2006) or Chelsea Clinton's Wedding  and The Godfather  (August 2010) or Did Arnold ever quit grabbing them? (May 2011)...and more.

Even a thought of some of his pictures make me laugh alone any where, any time. My son too likes him and it's fun to recall Luckovich cartoons in his company.

And  then one day I stopped following his work. What happened?

For me, Mr. Luckovich was at his best when Mr. Bush was running the world.

I had expressed my fears on November 4 2008, when Mr. Bush rode away,  that humour around the world was going to suffer with that change and I was going to miss Mr. Bush.

I was bloody right.


Look at the following cartoon.

This is vintage Luckovich and the reason is obvious: "George W. Bush Presidential Library". The library is going to open some time in April 2013.
Now, what does the cartoonist think of this upcoming opening of a presidential library?

Not books but bombs...Weapons of Mass Destruction that were never found...Remember Iraq, WMD inspectors, war on terror etc?

Are books too missing from the library just like WMD from Iraq? There is an added edge to the picture because Mr. Bush was (is?) NOT very fond of books. 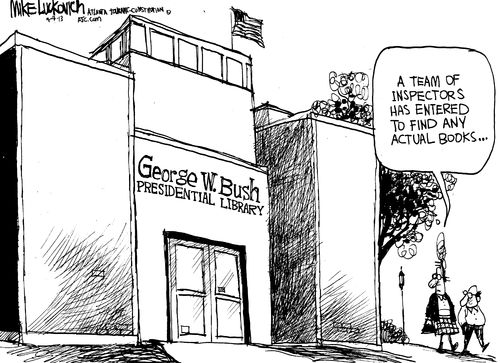