Just like Cricket, I have played only gulli Badminton. But I find the sport exhilarating.

I keep following it on NEO Sports. In 2011, I must have seen all the BWF World Superseries tournaments.

I know it has been an indifferent year for India's Saina Nehwal.

But on the afternoon of Dec 18, 2011, for me, Saina made up for all that. On her way to the final, she had beaten Wang Xin and Tine Baun with some fuel to spare.

When the camera focussed on Saina's face from the other side of the net and closed in on her face, her eyes- probably like Mahabharata's Arjuna-or even better, like a tigress from Nallamala forest- told me how determined she was to win it.

And she almost did the way first game went.

In 2012 London Olympics, China will most likely top the medals table. India will get by with a couple of medals of any colour.

In sports, China probably never considers India as their competition. But the only Indian sportsperson Chinese will fear in London 2012 is Saina Nehwal. They know she can beat the best of them in their sport on their turf. 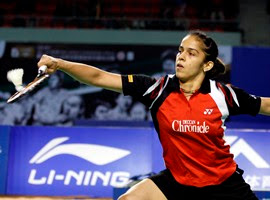 Picture courtesy: http://www.bwfbadminton.org
Posted by Aniruddha G. Kulkarni at 8:55 AM No comments: