WORLD CAR-FREE DAY is on September 22

The Economist June 8 2006 “The dirty sky”:
“…cars—potent symbols of individualism (and, some would say, individual selfishness)—“.

I don't like any car. People slobber over different models of cars. I find each of them ugly. I have never driven one in my life and may never. I have made career choices to fulfill this objective!

The only automobile I ever liked was Royal Enfield made Bullet motorcycle-which again I have never driven- not its looks but its sound..loud ticking of heartbeats..Jazz drumming...

"Every September 22, people across the globe get together to swear off their cars - if only for one day - in a collective reminder that we don't have to accept car-dominated societies, cities, or personal lives. Since its earliest incarnations in the 1970s and '80s, WORLD CAR-FREE DAY has grown into a massive global celebration of human-centric communities and people-powered transportation.

Car-Free Day 2007 could turn out to be the biggest yet. For the first time, China's government is hopping on board, with official events talking place in more than 100 cities, including Beijing and Shanghai. Officials will reportedly be trading in their famed black sedans for public transportation, and some roads will be closed to private cars.

As the world tunes in to the fact that the climate is heating up, this is the perfect opportunity to take the heat off the planet, and put it on city planners and politicians to give priority to cycling, walking and public transport, instead of oil-hungry automobiles." 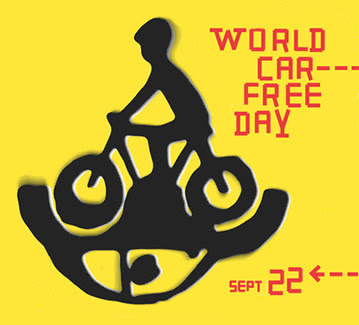 Posted by Aniruddha G. Kulkarni at 9:58 AM No comments: