The Theravada tradition generally believes that the Buddha was offered some kind of stale pork in his final meal.

Woody Allen: "My brain: it's my second favorite organ."

Anton Chekhov: "My holy of holies is the human body..."

Even on cable TV or DVD player, since then, I haven't watched any new Indian film for its entire duration. I often like parts of them.

But I keep following them.

The recent one 'Delhi Belly' caught my attention because its title features my most favourite organ. (I don't say tongue anymore because these days she has to worry about what happens later).

Recently I read an amazing essay 'Gutted' by Steven Shapin that reviews 'A Modern History of the Stomach: Gastric Illness, Medicine and British Society, 1800-1950' by Ian Miller.

I was stunned by the scholarship and writing skills of Mr Shapin. I laughed out loud a few times reading it.

"...The stomach troubles of some of the century’s great thinkers verged on common knowledge. Thomas Carlyle was advertised as a ‘martyr’ to dyspepsia – there was, he confided, only a small part of his life in which he ‘was not conscious of the ownership of that diabolical arrangement called a stomach’ – and Charles Darwin’s friends understood that his uncontrollable retching and farting seriously limited his public life..."

I don't know if Mr. Darwin knew Akbar-Birbal story where Birbal 'forces' the Emperor Akbar to admit finally that he too farts!

Also, I entirely agree with Mr. Carlyle- There is only a small part of my life in which I ‘am not conscious of the ownership of that diabolical arrangement called a stomach’.

"...And in the 1880s, Nietzsche diagnosed the whole Western philosophical tradition as a case of indigestion. Thus spake Zarathustra: ‘Because [the philosophers] learned badly and not the best, and everything too early and everything too fast; because they ate badly: from thence hath resulted their ruined stomach.’ Whereupon Nietzsche took himself off to Turin to purge his philosophical-digestive system: ‘No more greasy, stodgy, beer-washed idealistic Christian German food for me! I shall curl up with gut pain, vomit if you don’t give me Italian vegetables.’..."

I wonder what the great Nietzsche would have produced if he was put on diet of simple Indian fare of dal, chawal, roti. Would he be fiery himself?

"...Just a few years later, a London physician called John Clarke closed the circle by suggesting that indigestion and evolution were causally connected: if Darwin’s stomach had been healthier, ‘his view of humanity might possibly have been a more generous and exalted one.’ Clarke had no doubt that the writings of ‘some pessimistic philosophers, which modern would-be thinkers waste their energies in trying to understand, are the pure products of disordered digestion’..."

Can you imagine...there would be no theory of evolution if Mr. Darwin's stomach was healthier? 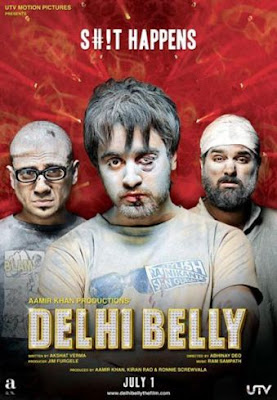 [p.s
Recently, when I watched Along Came Polly (2004), I realised how mainstream toilet-humour had now become in Hollywood- can you get more mainstream than Ben Stiller & Jennifer Aniston?

It was only a matter of time t-h entered Hindi films in a big way.

It has with DB. Apparently, by some accounts, it's the 'filthiest' Hindi film ever.

And people knocked the late Dada Kondke (दादा कोंडके) for an occasional toilet-gag. The best one for me remains: Dada lifts a stone in an open ground to throw at something and then takes it to his nose (wonder why because I never made that mistake in my childhood) only to drop it in disgust saying- "has been used"!]
Posted by Aniruddha G. Kulkarni at 10:34 AM 2 comments: Links to this post