George Orwell:”The only true test of artistic merit is survival.”

“...The play is essentially a farce but its structure and development are not foreign but native and in the nature of folk play…

The play featured for the first time bedroom scene on Marathi stage, done boldly, confidently but tastefully, with restraint…”

Main characters of the play are Krishna, Balaram, Arjun, Subhadra, Rukmini, Narada, Satyaki and among them they sing about 100 songs!

Dhond says:"...Shankararaav Mujumadaar शंकरराव मुजुमदार who played Rukmini couldn't sing. Therefore, Rukmini who moves among the people who sing at the drop of a hat was given no song by Kirloskar!"

Imitating Balgandharva, college-going young men from all over Maharashtra used to dress like women, get photographed and carry the picture around proudly.
Is this the birth of modern Indian metrosexual man?

If Saubhadra is the greatest comedy of Marathi stage, “One More Glass” by R G Gadkari (1885-1919)[एकच प्याला, राम गणेश गडकरी] is perhaps its greatest tragedy. It soon will complete its own century.

Dhond is his book “Moon of the Fourth Day” (चंद्र चवथिचा, 1987) claims that prodigally talented Gadkari almost invented The Theatre of the Absurd which was later done by Samuel Beckett and Eugène Ionesco.

Are women in the picture below watching Saubhadra? 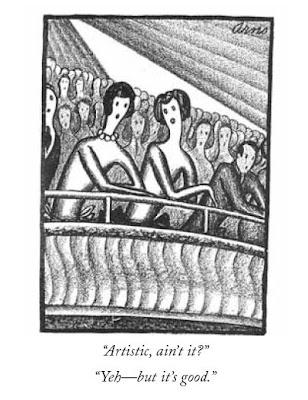