Learning to Lucid-Dream to Meet My Mother

One of my most favourite authors is Carl Sagan.

Read this passage from his book-my most favourite- “The Demon-Haunted World” (1997, HEADLINE)

“My parents died years ago. I was very close to them. I still miss them terribly. I know I always will. I long to believe that their essence, their personalities, what I loved so much about them, are -- really and truly -- still in existence somewhere. I wouldn't ask very much, just five or ten minutes a year, say, to tell them about their grandchildren, to catch them up on the latest news, to remind them that I love them. There's a part of me -- no matter how childish it sounds -- that wonders how they are. "Is everything all right?" I want to ask. The last words I found myself saying to my father, at the moment of his death, were "Take care."

Sometimes I dream that I'm talking to my parents, and suddenly -- still immersed in the dreamwork -- I'm seized by the overpowering realization that they didn't really die, that it's all been some kind of horrible mistake. Why, here they are, alive and well, my father making wry jokes, my mother earnestly advising me to wear a muffler because the weather is chilly. When I wake up I go through an abbreviated process of mourning all over again. Plainly, there's something within me that's ready to believe in life after death. And it's not the least bit interested in whether there's any sober evidence for it.”

I was in tears when I read this because I too wanted to meet my mother-who I lost in January 2006- for “just five or ten minutes a year”.

If I were to meet her today, I would tell her “Ganpati festival is no fun without you.”

STEPHANIE ROSENBLOOM has written an essay “Living Your Dreams, in a Manner of Speaking” for NYT September 16, 2007.

She says: “THE kiss you share with the exquisite stranger is electric, deep and seemingly endless — that is until you open an eye and see drool on your pillow.
If only you could have slept long enough to consummate the seduction. Then again, you had no idea you were dreaming. Besides, you cannot control the nightly ride on the wings of your subconscious. Or can you?

Maybe, if you learn to practice “lucid dreaming,” a state in which a sleeping person becomes aware he or she is dreaming and may even be able to direct the action. Those who regularly experience the phenomenon say that like the physics-defying characters in “The Matrix,” they are able to generate or manipulate the fantastical events that unfold. They can fly without wings, play instruments they never learned, go bowling with T. S. Eliot — and, yes, indulge sexual fantasies…..”

As I have said before Americans think or fantasize rarely anything beyond sex but I must learn to lucid-dream to meet my mother. 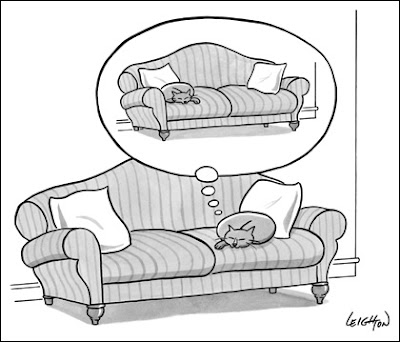 The New Yorker
Posted by Aniruddha G. Kulkarni at 7:40 PM No comments: