[You may want to visit Facebook page I have created: Dinanath Dalal (In Marathi: दीनानाथ दलाल). I post updated information on Shri. Dalal and his art there.]

S D Phadnis (शि द फडणीस) said on the occasion that Dalal built a bridge over the divide between sensibility of an ordinary man and the art of painting.

For instance, look below at the picture Phadnis and others are looking at. It is artist's imagination of Shivaji's court. I don't know how accurate it is historically but I always thought Shivaji's court looked like that! 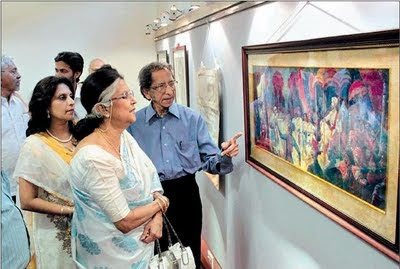 (The lady in the forefront is Suman Kalyanpur सुमन कल्याणपुर .)

(p.s. We attended a family function on June 26 2011 at a community hall- 'Gokul'- in Pune. One of its wall had a replica of this very painting of Dalal. It made my day!)

The person whose pictures I most watched as a kid was Dalal, followed by Bhaiyyasaheb Omkar (भैय्यासाहेब ओंकार), Raghuvir Mulgaonkar (रघुवीर मुळगावकर)...and many anonymous artists, including those who painted the front wall of famous marriage-halls of Miraj with various figures like Jay and Vijay, the gatekeepers of Vishnu.

Dalal gave lacs of Marathi people like me a "vision" to imagine a historical or mythical event. Or simply a beautiful picture to enjoy.

I had already seen dozens of Dalal's pictures before I even learnt his name! I also remember how respectfully his name was always mentioned at our home by our father. (Not many from Marathi art world- not certainly Mulgaonkar- can claim that honour!)

Dalal's influence on the pictures that I see all around in Maharashtra persists to this day. But he is hardly mentioned in 'popular' Marathi media.

No one writing in Marathi could have done more justice to Dalal's talent than Sarwate. [It's likely D G Godse's द. ग. गोडसे essay on Dalal- 'The Genius from an Enchanted land'- is equally good but I haven't still read it.]

Sarwate says we can't imagine the popularity Dalal attained in Maharashtra during 1940-1970. Only Raja Ravi Varma (1848-1906) did it earlier decades...There was probably no prominent Marathi writer whose at least one book's cover was not created by Dalal...His depiction of women became a form of poetry...He can be compared only to C. K. Nayudu and Bal Gandharva (बालगंधर्व).

(Pause a little to appreciate how Maharashtra embraced whole heartedly non-Marathi artist Raja Ravi Varma. It was no big deal in India of those days. Although many of them didn't understand Marathi fully, Bal Gandharva was as much loved by a lot of Gujaratis, Parsees and North Kannadigas as Maharashtrians.)

Sarwate dwells on many fascinating aspects of Dalal's art but the last three paragraphs of his essay are most moving:

"...it can be deduced from his writings that despite huge popular and commercial success Dalal wasn't very happy internally...he wanted to pursue only classical art by giving up commercial art entirely...he couldn't quite do it but because of this burning desire his commercial art undoubtedly was touched by class...And it is a great fortune of Marathi literature and art."

Dalal has left behind a large body of creative output. 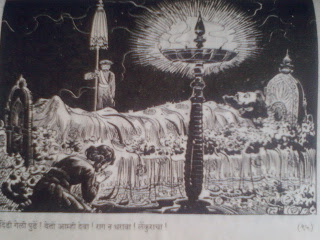 I remember how devastated I felt when- reading it first time in c 1970- I came across the picture at the end of the book.

Did Shivaji-maharaj too die just like so many of them did in our Miraj neighbourhood? I couldn't quite get over the grief for many days. I still recall the pain when I see it....Dalal's picture, not Purandare's words, had created that mood.

George Orwell has said: "Many children begin to know his characters by sight before they can even read, for on the whole Dickens was lucky in his illustrators."

See the picture just below this paragraph. On this blog, I have appreciated beauty of many women- from my mother to Leela Naidu, from Nutan to Ingrid Bergman, from Mohenjo-daro dancing girl to a beauty from Kanheri caves. ...but I have no words to describe Dalal's HER. 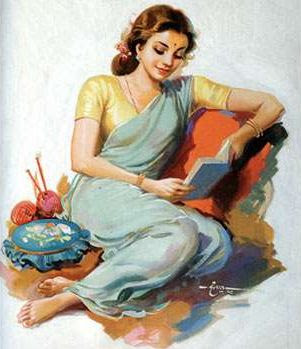 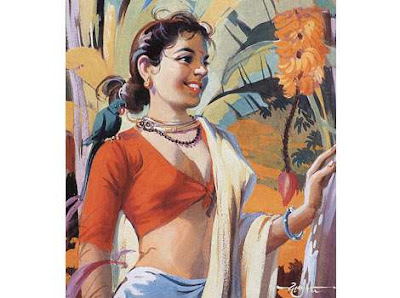 Dalal from the planet earth!

I liked your blog ..

thanks for writing your thoughts!

Thank you, Mr. Mangesh for your comment....I am also posting your comment to the Facebook page I maintain on Shri Dalal....thanks again