Watch Your Expression While Talking to Pet Donkey!

On October 4, 2007, Asian Age quoted from Maneka Gandhi’s speech delivered at the opening ceremony of the Donkey Sanctuary in India on January 12, 2000.

She said: “…But, I happen to have a special place in my heart for the donkey. Just look how beautiful his eyes are. You can learn many social skills from him. Have you noticed that a donkey is never a loner? Even a child-donkey is able to make many friends. He shares his secrets with his friends. He cries if you separate him from them. When we mistreat him and overload him for hauling dirt and hundreds of other materials, he is only able to complain to his friends. The friends console him and assure him that there are better days ahead.”

It’s very moving like many of her other writings on the subject of animals.

I too find donkeys very interesting. But I don’t comprehend what to make of their habit of taking out their considerable penis and running at full tilt!

“An Australian woman was killed by a pet camel given to her as a 60th birthday present after the animal apparently tried to have sex, police said Sunday.

The woman, whose name was not released, was killed Saturday at her family's sheep and cattle ranch near Mitchell, 350 miles west of the Queensland state capital Brisbane, state police Detective Senior Constable Craig Gregory said.
The 10-month-old male camel — weighing about 330 pounds — knocked the woman to the ground, lay on top of her, then exhibited what police suspect was mating behavior, Gregory said.

"I'd say it's probably been playing, or it may be even a sexual sort of thing," Gregory said, adding the camel almost suffocated the family's pet goat by straddling it on several occasions.

Camel expert Chris Hill said he had no doubt the camel's behavior was sexual.
Hill, who has offered camel rides to tourists for 20 years, said young camels are not aggressive, but can be dangerous if treated as pets without discipline.

The fate of the camel was not known.

The woman was given the camel in March as a birthday present from her husband and daughter. "She had a love of exotic pets," Gregory said.”

Thanks to my neighbourhood at Miraj, I knew all lewd expressions in Marathi and Urdu before I reached IIT, Madras. But one of the first things I learnt there was hump also meant something other than “Arch one's back”!

Now will this camel in the picture understand that 'Hump day' is a synonym for Wednesday? 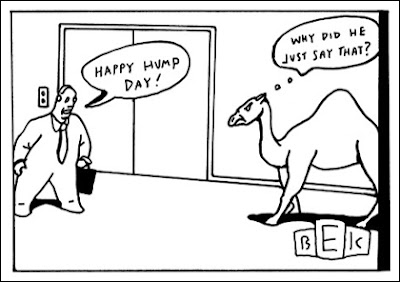 Artist: Bruce Eric Kaplan The New Yorker October 2007
Posted by Aniruddha G. Kulkarni at 9:58 AM No comments: Links to this post