"Scientific American" July 2007 has an article by Steve Mirsky “An Earth Without People -A new way to examine humanity's impact on the environment is to consider how the world would fare if all the people disappeared”.

It is based on “World without Us”, a new book by science writer Alan Weisman.

“According to Weisman, large parts of our physical infrastructure would begin to crumble almost immediately. Without street cleaners and road crews, our grand boulevards and superhighways would start to crack and buckle in a matter of months. Over the following decades many houses and office buildings would collapse, but some ordinary items would resist decay for an extraordinarily long time. Stainless-steel pots, for example, could last for millennia, especially if they were buried in the weed-covered mounds that used to be our kitchens. And certain common plastics might remain intact for hundreds of thousands of years; they would not break down until microbes evolved the ability to consume them.”

“If all human beings vanished, Manhattan would eventually revert to a forested island. Many skyscrapers would topple within decades, undermined by waterlogged foundations; stone buildings such as St. Patrick's Cathedral would survive longer. Weeds and colonizing trees would take root in the cracked pavement, while raptors nested in the ruins and foxes roamed the streets.”

In Vasant Sarwate’s वसंत सरवटे picture below, today’s sheep, coming across a milestone, are saying: “who knows why men erect a bloody hurdle of such a stone right in the middle of the road”

In a world without us, a lot more animal species of tomorrow will be expressing similar feelings-"bloody hurdle in the middle of the road"-about all our grand monuments, including recently announced Seven Wonders of the World! 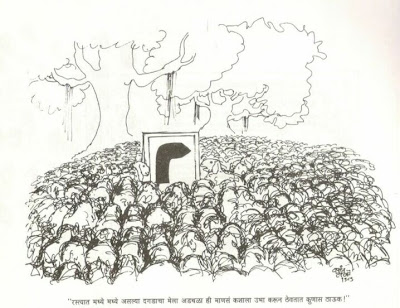 My 13 year old son Jaydutt Kulkarni goes to an English medium school at Pune and struggles, like most of his classmates, with Marathi language syntax- called Shuddhalekhan-“chaste writing”- in Marathi. My wife and I express horror seeing some of his bloomers. He does not make such mistakes writing English. Surprisingly, he does not make them in Hindi too. Mind you, we all speak Marathi at home and live in Marathi speaking neighbourhood.

Therefore, I wonder what the real problem is. Has it anything do with the structure and/or teaching of the language?

D D Kosambi has an interesting take ("An Introduction to the study of Indian History", Popular Prakashan, 1956-2004) on grammar of mother language of Marathi - Sanskrit.

“…The founder of Sanskrit grammar was Panini, who combined the efforts of many predecessors with his own profound observations to give us the oldest scientific grammar known anywhere in the world….Nevertheless Panini killed all preceding grammatical systems, nearly killed further development of the language…
Floridity became increasingly a characteristic of Sanskrit so that the use of twisted construction, intricate compounds, innumerable synonyms, over-exaggeration make it more and more difficult to obtain the precise meaning from a Sanskrit document…

The distinction between Sanskrit and Arabic in this respect should also be considered. Arab works on medicine, geography, mathematics, astronomy, practical sciences were precise enough to be used in their day from Oxford to Malaya. Yet Arabic too had been imposed with a new religion upon people of many different nationalities. The difference was that ‘Arab’ literati were not primarily a disdainful priest-caste. Those who wrote were not ashamed to participate in trade, warfare, and experimental science, not to write annals…”

Vasant Sarwate’s वसंत सरवटे picture below is equally funny. The boss has started dictating a Marathi letter to his secretary and instead of airing some meaningful matter, has ended up explaining how every single letter of every single word should be written.

Is this linguistic hell? I am sure at least my son currently feels it that way! 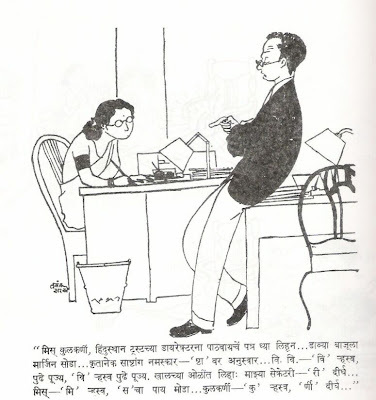